When doubting whether or not you are forgiven, turn your attention to the cross of Jesus. 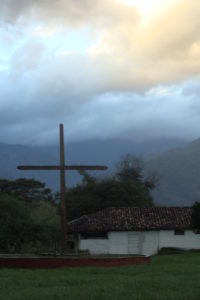 1.  Allow yourself to focus your meditation on the price Christ paid on the cross so you could personally be forgiven.

A beaten-beyond-recognition Christ hung on the cross. Beard ripped out, crown of thorns causing blood to gush down his face, His skin ripped off by a Cat of Nine Tails, small railroad spikes driven through the most sensitive part of the hand just below the palm and in His feet. I had to stop and hang onto my truck when I heard pastor Mark Driscoll talk about all of this in a recent podcast from Mars Hill Church because I became dizzy as the realization of the reality of the absolute beating Christ took for me. I did this to Him, yet He forgave me. He took my sin and paid the sacrifice for it all; then He forgave me.

We as Christians cannot forgive anyone who has wronged us for any reason if we do not understand from where forgiveness originates. Jesus taught His disciples to pray asking for forgiveness and forgiving others. But this idea of forgiveness for sin was rammed home to the disciples at the cross, and validated by the risen King.

2.  Allow Christ to hold a conversation with you about His forgiveness for your sins like the conversation he held with Peter after the resurrection.

No one knew the great need to be personally forgiven better than Peter. One morning after Jesus’ crucifixion and following resurrection the disciples were out fishing and Christ met them on the shore of the lake.  As the disciples hauled their morning catch of fish ashore, Jesus had made breakfast.  The elephant on the beach was Peter’s guilt and shame.

A few short days before, when Jesus was arrested, Peter had sworn he didn’t know who Jesus was when questioned by strangers.  Afterwards the writers of the New Testament Gospels record that Peter wept bitterly because he had denied Jesus.  Jesus had told Peter that Peter’s denial would come before the rooster crowed to announce the morning.  Peter claimed he would never do such a thing to his teacher, master and Lord.  It is true that Peter denied Jesus three times, but on that beach Peter was restored…forgiven…by Jesus Christ in person. Now that’s forgiveness. Forgiveness offered by Christ to Peter on the beach in front of the other disciples. The loving, yet piercing eyes of the Savior looking into the desperate-for-forgiveness eyes of the man who longed for his Master to offer what he needed, and Jesus saying “Feed My sheep…”, “Shepherd My flock…”, “Feed My lambs…”. Three times Peter denied Christ, now three times Jesus asked Peter “Do you love Me?” Three times Peter was forgiven and given instruction to get back to the work of leading the Church.  (see John 21:15-19)

I doubt Peter forgot any part of that conversation. I imagine that Peter used it as a sermon illustration and listeners never grew tired of hearing the words of Jesus.

When the Lord of All speaks forgiveness to you, do you listen? How many times have you begged forgiveness before the Throne, but you don’t hear His voice? You continue to ask for forgiveness for sins already forgiven by God…yet you don’t take time to listen. Have you jumped up from your prayer time, announced forgiveness to that person …but you have no clue what Jesus Himself just said to you?

After you hear these words from the Savior, forgiving others seventy times seven will not seem impossible.

Posted in Forgiveness, Praying For Needs