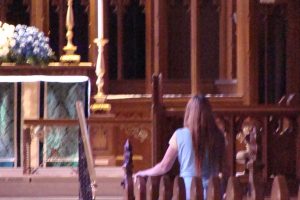 The Bible says that God loves a cheerful giver and I believe He also loves a cheerful pray-er, someone who can smile and even laugh when they get tongue tied and say funny things during prayer.  I believe that even this is from the Holy Spirit, especially when we do a blooper in a group where people new to prayer are afraid to pray out loud.   I think it helps us all see that we don’t have to say things perfectly, we only have to be perfectly willing – and have a good sense of humor.

The Last to Receive the Baby News

One night at our Intercessory prayer group one of our members began offering an absolutely beautiful and heartfelt prayer for our Youth Minister and his pregnant wife as his wife approached her due date.  Our group member prayed asking for a safe and speedy arrival for the baby.  However as she prayed on covering every aspect of labor and delivery, I could hear my fellow group members squirming because the baby had actually been born two days earlier and apparently the woman praying hadn’t heard about it yet.

None of us knew exactly what to do about this lovely offering of prayer whose timing was off.  When the group member finished up another member had an idea and followed up with this, “Lord, thank you for that lovely prayer and thank you that it’s already been answered and that a beautiful 6 lb 6 oz. girl named Rose was born day before yesterday to our Youth Minister’s wife.”

After we had finished our prayer time, someone spoke up and gave us all a chuckle by saying, “Wow!  That was the fastest answer to prayer I’ve ever seen!”

The Mix-up Between Ears and Nose

One day I was praying with a prayer partner who was from Korea.  To me it seemed as if she spoke excellent English, but she was too self conscious to pray out loud in English, so I told her to pray in Korean and I would pray in English.  When she finished, I got revved up thanking God for my friend’s wonderful musical talent that she used for the Lord and then my words went faster than my thinking as I prayed, “Lord, may it be a sweet incense in your ears.”

I suddenly realized the nonsense of what I had prayed.  I changed my tone and said, “Lord, that didn’t make any sense.  Incense goes into your nose, not your ears.  But you’re God, so I guess anything is possible with you.”

We both laughed at the same time.  I realized that maybe my blooper might help her become more comfortable praying out loud in English when she realized that even someone like me who’s been speaking English since she could say “Da Da” doesn’t always get it right.

In the Garden of Evil

One night I was in a small prayer group.  Again there was a new member who told us she wasn’t comfortable praying out loud.  She said she felt so inadequate because our prayers  sounded so eloquent.  We were praying about someone having problems and who was really stressed out and I started picturing this person in a beautiful peaceful garden in God’s presence.  I opened my mouth to paint a picture of paradise like the Garden of Eden.

Unfortunately, when I started to describe it I said, “Give her peace just like in the Garden of Evil.”   I had flat out said the exact opposite of what I meant!  There was nothing to do but laugh and say, “Whoops.  I meant to say the Garden of Eden.”   After our prayer time I told the new member of our group, “Well now you don’t have to be afraid to pray out loud.  Nothing you could say in prayer could be crazier than what I just said.”

A Pain in Grandma’s Foot

On the first day of our mission trip to central Honduras a woman in our group named Victoria returned to our bunkroom at the ranch very upset.  She explained that her group had worked that day with a family that included an elderly grandma with an infected foot.  One of our team members who’s a doctor had examined the foot and had privately told Victoria that the foot was in such bad shape not much could be done for it.

Because Victoria was so upset, we sat down on her bunk and prayed for the grandmother.  After our prayer I remembered that in the Spanish Bible I had there were prayers in the front, including a prayer for the sick.  I’m not very good at Spanish, so I wouldn’t be able to put together much of a prayer on my own, however I told Victoria that the next day I would go and work with her group and find an opportunity for us to pray together with the grandmother.

The next day we arrived at the work site and the grandmother was sitting outside in the dusty yard on a small rock with her bad foot wrapped up with rags.  The ground was uneven, rocky and littered with debris.  As best I could in Spanish I asked the Grandma if she would like me to pray with her for her foot.  She nodded yes.

I went to sit down on the other side of her and as I did so, I stumbled and the next thing I knew my foot hit her bad foot.  I was absolutely mortified.  I couldn’t believe how clumsy I’d been.  Here I was coming to help ease the woman’s pain and I’d kicked her bad foot!  Thankfully the grandma didn’t cry out in pain as I profusely repeated over and over with pitiful facial expressions what I hoped was an apology that meant “I’m very sorry.”  I finally settled down and recited with great passion the prayer for healing from the front of the Spanish Bible, figuring that now the woman needed a double dose of help not only from her infection but also from her clumsy comforter.

Thankfully, God found a more effective conduit of healing power later that week when mission team collected a few dollars for a neighbor with a car to drive the grandma to the nearest hospital several hours away for proper treatment.

Next time I go to pray with someone who’s injured, I think I’ll take a minute to not only ask for God’s Grace but I’ll also remember to ask for a little more gracefulness, especially if  I’m called upon to try and squat down on a rock in a farm yard.

It was Ash Wednesday and 23 church members were gathered on the long back porch of the bunk room at a ranch in Honduras during a mission project.  Although we attend a very large church, as you might imagine you really get to know each other spending a week in close quarters, eating meals together, waiting in airports and riding to work projects for hours on end in the back of Land Rovers.

Our minister was with us and the group requested that he say a few traditional words during our nightly devotions about Ash Wednesday.  We had hoped to have the minister make the sign of the cross in ashes on our foreheads, but the best we could do was cigar ash mixed with water and it was way too nasty to use.  So our minister opted to simply go around and lay his hands on our heads and say our names and repeat “Remember that you are dust and to dust you shall return.”

The minister worked his way through 8 or 9 people and put his hands on my head and suddenly there was an awkward pause.  I realized he’d temporarily forgotten my name!  It was certainly a temporary lapse of brain power, because this was our fourth mission trip together!

I opened my eyes and quickly said, “My name’s Karen.”

He grinned sheepishly and said, “Thanks.  I know who you are.  But I’m always nervous and worried that I’m going to get someone’s name wrong when I’m praying for them.”

Then he said my name and blessed me.

When everyone had finally been properly prayed over by name without further incident,  a man who works as a funeral director said, “One time I was helping with a funeral and I saw the minister was up front searching through his Bible looking for something.  I knew he didn’t remember the name of the person he was supposed to eulogize!  Instead of saying a name, during the whole service he kept calling the departed  ‘Our dear sister.’”

The next week after our return home it was communion Sunday.  When I went forward to receive the bread from our minister he looked directly into my eyes and said my name, “Karen, the body of Christ broken for you.”  I smiled and acknowledged his good recovery.

Later the minister popped his head in our Sunday school room and said, “See, I remembered your name this time.”

I looked down at my lapel and wiggled the huge plastic permanent church name tag with my name in big black letters on it and said, “This time I made it easy for you.”

I can’t tell you how many times I’ve been in the same predicament myself, suddenly drawing an absolute blank about the name of the person I’m praying with.  You won’t believe how difficult it is to keep wording requests in such a way that you don’t have to insert a proper name anywhere.

In fact, knowing how terrible I am at remembering names, to avoid my inevitable bloopers, if I’m in charge of getting prayer requests from a group I hand out index cards and tell everyone to put their names in big bold letters on the top before they write down their request.

It  helps when I get name amnesia in prayer.

Posted in How To Pray, Prayer Lifestyle, Prayer Problems and tagged laughing in prayer, prayer bloopers