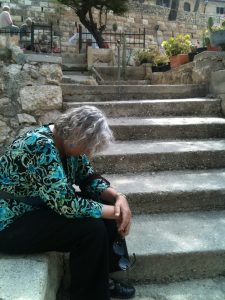 Often when we are praying for those we dearly love we honestly can’t let go of them even when it becomes apparent that the time has come when we should let go.  Writer Bill Roland faced this dilemma when his father was dying of cancer.  Learn with him the prayer power of Romans 8:26 Praying.

My father was a big man, kind, quiet, and loved by those who knew him.  He had worked over forty years on the railroad.  He was a World War II Veteran having served in Germany building and repairing track for our troops to move men and supplies.  He had been married over fifty years to the love of his life.  They had two sons and four grandsons. I was the older of those two sons.  I had always loved and admired him.

My father was a Christian but only in the last few years of his life had he become active in a church.  However, in those years he participated with his all and was ordained as a deacon.

When he had been diagnosed with terminal cancer and had been given about a year to live, I had prayed as never before for a miracle.  We had that year, however, and we were able to talk to him about all those things you would want to say to your loved one but may not have done under other circumstances.

We rented a motor home that summer and took him to North Carolina to visit a favorite niece.  It was a most memorable week.

But he was about to die. He had been coherent right up to the last couple of days before “that night.” He had a chance also to tell those he loved the things he wanted remembered.

But now he was about to die! I had come from my home in Tallahassee, Florida, to my parents’ home in Ocala, Florida, to be with him.  By the time I arrived he was not coherent.  Only on one or two occasions did he respond to us.  I had to return to my office to clear my calendar and then return to be with him.  As I was about to leave, I leaned over and kissed his forehead, told him I loved him and I had to go but would be back the next day.  He replied, “You be careful and watch those other drivers.”  That was the warning he always gave me when I left. That was the last thing he ever said to me.

When I returned the next day he had been moved to a hospital bed in the family room.  He slept mostly and was not communicative at all.  It became more obvious that his time was fast approaching to go home to be with his Lord.

That night he was sound asleep as I readied to go to bed on the couch beside him.  He was snoring so loudly the windows almost rattled.

I knelt down by the couch to pray.  I had heard others who had faced the pending death of a loved one say that they had prayed for God to take their loved one on to heaven.  As I tried to pray I could not say that prayer.  I did not want to lose my father.  Oh, I knew without a doubt that he would be going to heaven.  He would be united with his family and friends who had gone on before.  But I just could not pray for the Lord to take him.  I prayed, “Father, I cannot pray for you to take him.  I don’t know what to say.”

At that very moment words came to my mind and I knew they were from the Bible because they sounded very familiar, “. . . We do not know what we ought to pray for, but the Spirit himself intercedes for us with groans that words cannot express.”  At that moment I realized that it was OK that I could not ask God to take my father home.  The Holy Spirit had assured by impressing me with that Bible verse that God understood my dilemma.  He would take care of my father and me.  I then was at peace.

My father passed away fifteen minutes later.  I miss him, but I know that God was ready to take him home and He provided me with the peace I needed as he departed this world.

After my father’s death I looked up the powerful passage that came to me as a living word at my time of greatest need.  I knew the words came from the Book of Romans because it’s my favorite chapter in the Bible and I found the verse in my favorite chapter in the book of Romans – chapter 8, verse 26.   “In the same way, the Spirit helps us in our weakness.  We do not know what we ought to pray for; but the spirit himself intercedes for us with groans that words cannot express. ”  (New International Version)