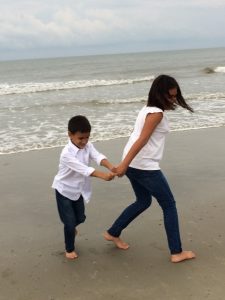 My boys tried little league baseball.  Didn’t like it.  Football?  Same thing.  After a long line of other sport-attempts, they found their passion:  Skateboarding.  The gadget looked innocent enough.  Mini-surfboard on wheels.  You ride it five feet and jump off.  Routine.    But there is nothing ‘routine’ about what they do.  They look for impossible surfaces — staircase rails, stairs, ramps, jumps and curbs.  Then they see who can become crippled most severely in the least amount of time.

“Mom, come here quickly – you won’t believe what I can do.” The words ring terror as I brace myself, and watch.  The stunt almost always involves a ‘kersplat’, followed by a roll in pain.  Then, they pop-up and do-it-again.  I have seen some hideous things having to do with iron bars and crotches. At the end of a really good day, they compare bruises and bumps and stories.   Seldom do they complain about any real pain.  They take pride in shaking it off, taping it up and walking it out.  As they relive it again and again, stories become more humorous.   (must be a guy thing)

The other night, I had been in that twilight sleep — the really “cool-sheet stuff’, just before drop off, when in hobbles my youngest boy, just turned 14.  “Mom”, he  announced, “I’m in agonizing pain”.

Throwing off the covers, I start:  ‘Well, it’s no wonder with all that crashing that’s been happening skateboarding.”

“Co-ode!!” (I turn his one syllable name into two)  grabbing his foot and pulling it back so I could see.  And there it was:  a hot-pink little toe.

“Hang-nail!” he announces.   You could almost see the toe throb.

Respective to other major injuries, this didn’t seem to be enough to keep me awake:  “Awe, come on Code.  You’ da Man.  How much pain can you be in?  Go soak the thing in hot water.”

“Are you kidding mom?” Cody responds. “This toe is too sore to move.   I’m not soaking it”.

In my frustration I finally say, “Look Code, I’m tired.  It’s time for you to be in bed too.  I have no solution for a hang nail.  Suck it up and get to bed.”

He does not like my solution and pulls up a sleeping bag next to me.  Lying on my bedroom floor, he moans for the next thirty- minutes.  The next morning he walks into the kitchen normally, until I ask him about his toe.  Then, he hobbles over to the table.

I’ve been in Prayer Groups before, where women find the goofiest things to pray about. It’s okay by me.  What bothers them, bothers the Lord. But more unsettling are the groups where women are afraid to bring up what they consider to be small stuff.      They are afraid to announce their irritation  – for fear that to somebody else, their major pain  will just be a ‘hang-nail on a pinkie’.

The purpose of prayer groups is to share with each other ‘that thing’ which has worried you and consumed much of your time.  Together, haul that concern to God and dump it at the foot of the cross.  ‘Things’ are solved there.

We’re all bothered by the big things.  But little things put a kink in our direction and if it bothers you, it bothers God. Size has never outweighed God’s ability. Large or small, whatever you carry, give it to Him.

“Praise be to God, who has not rejected my prayer or withheld his love from me!”  Psalm 66:20

“He will respond to the prayer of the destitute; He will not despise their plea.”  Pslam 102:17

Next time you find yourself in a prayer group, bring up that thing that bothers you most.  Tell the group of loving Christians, it may not seem important to them, but it is important to you.  And    remember, if you feel inclined to roll your eyes at the microscopic importance of anyone’s detail, your turn is coming.  The field behind the cross is strewn with former ‘little troubles’, solved at the cross.

Some of God’s greatest work has to do with ‘details’.

In a self-defense mini-course I once took, the instructor told us:  “If an attacker comes at you, reach down and yank back his pinky finger. As hard as you can.    This will debilitate him”.

Sound ridiculous?   Ever have a hang-nail?

Posted in How To Pray, Prayer Groups, Prayer Problems and tagged pray the small stuff, prayer, praying for others

Judi Collins is President of Jayan Films and just started up a new company: fishfeed Digital, to improve video usage in websites. Judi is a devotional writer, Bible Study leader and blogger under the pen name Gracelepeep. She once was named "Miss Congeniality" in the Miss Atlanta contest. She has six kids, six grandkids, two ninety-year old mom's and lives her challenging little life in Alpharetta, Georgia.

← Praying for the Wrong ThingWeakness and Helplessness →