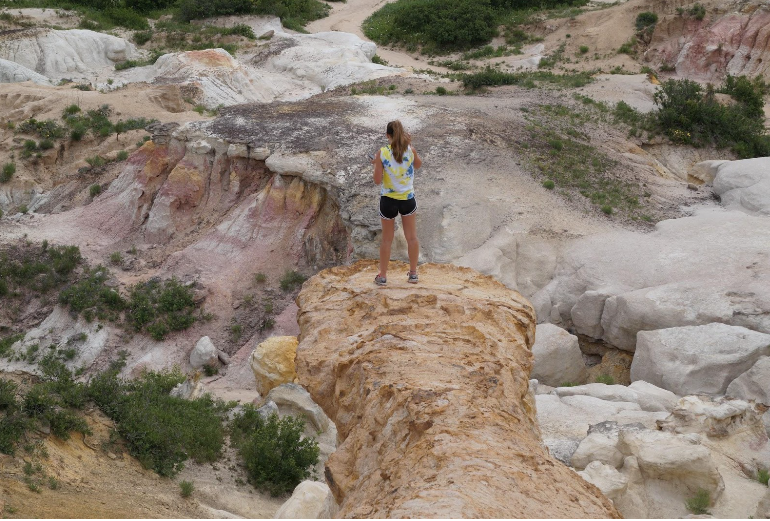 Have you ever hesitated to try something because you don’t think you can make it and succeed?  God recently brought home a message to me about times of opportunity where I have turned away. Had I kept my eyes on God I might have succeeded by depending on him.

Climbing on a rock formation with my son and daughter

Many of us have heard it said that we must live in the moment.  Sometimes the best opportunity we have is the one staring us in the face.  On our family vacation to Colorado in June of 2019 I was faced with such an opportunity.  This time I didn’t talk myself out of it. I embraced it.

I was climbing on a rock formation with my twenty-year old son and seventeen-year old daughter.  We had been moving around quite a bit climbing up and down the formations. I was in a great place mentally and enjoying the moment of living this adventure with the kids.  Earlier that afternoon I had jumped from one rock to another. The rock I jumped from was about a foot taller than the rock that I landed on. The span between the two was only about four feet.

I wasn’t feeling invincible, but I also was not afraid.

The leap of faith that was to come was not going to be my leap.  I was confident in my jumping abilities and my daredevil thought process was on maximum.  I wasn’t going to take huge risks, but I was willing to take a risk I had not taken in years.

Thirty feet above of terra firma and I was ambling around as if I were twenty-one again.

I had scrambled up a low sloping formation and came upon another place where the easiest route from one formation to another was to jump an approximated four-and-a-half to five foot span.  The distance was farther than the last jump, but had a little more difficulty involved due to the landing. I wasn’t jumping from one level surface to another. I was jumping from a level surface to a sloped surface.  Grabbing the small rock ridge just up from the landing spot would be a good idea to steady oneself after sticking the landing.

My daughter, Emily, had walked by me and said, “Don’t jump.  That’s too far.”

Let me insert here that missing the jump would have resulted in sliding down a rock formation to a point where the two sides were only about five inches apart.  It would have been a slide of about seven feet total. No one was in mortal danger.

My son, Michael, who is an inch or two taller than I am, followed just a few moments later.  His philosophy was that his longer legs should make the jump easier for him. Michael was right.  Now we get to the real cauldron of delicious choice-making. Emily was not going to let the two of us continue on without her making the same jump.  She could have taken a safer route around the small crevice and joined up with us.

A father’s promise to catch you

I encouraged her.  “You can make the jump.  Just concentrate on the landing and don’t worry about the leap.  I’ll catch you.”

A leap of faith and a father’s promise.

God has promised to never leave us, nor forsake us.  I wasn’t going to leave Emily alone on the rock. I wasn’t going to walk away.  I didn’t leave her to figure it out for herself. I stayed there on the other side waiting for her to jump.  I was there to catch her in the event she slipped and started to fall. I was going to do everything in my power to keep her safe.

The same as I promised Emily I would be right there to catch her, Jesus made a promise to his disciples, and all of us who were yet to come:

“I will ask the Father, and he will give you another advocate to help you and be with you forever — the Spirit of Truth.  The world cannot accept him, because it neither sees him nor knows him. But you know him, for he lives with you and will be in you.  I will not leave you as orphans; I will come to you. Before long, the world will not see me anymore, but you will see me. Because I live, you also will live.”  (John 14:15-19 HCSB)

Your chance to let God take care of the outcome

What leap of faith, or even step of obedience is God asking you to do?  Do you trust him to follow through? Will you be obedient?

Emily’s decision to jump or not was not about obedience.  It was about trust. Your leap of faith may wind up being more about being obedient to God’s will for your life.  Trust and obedience work together. We believe that God is God, he is whom we serve, so we must obey what he says.

“Now what I am commanding you today is not too difficult for you or beyond your reach.

It is not up in heaven, so that you have to ask, ‘Who will ascend into heaven to get it and

proclaim it to us so we may obey it?’ Nor is it beyond the sea, so that you have to ask,

The amazing moment you try and succeed

I need to note here that while all of this was happening on top of the rock formations, my GoPro camera was recording.  I didn’t realize that it was still going, because I thought I had stopped the recording process several minutes before. As I was browsing through the videos after returning home, I found the video of me jumping from one rock to another.  And then I came upon Emily and her dilemma.

Several minutes roll by and then the moment comes.  Emily had steeled her nerves several times to take the jump, but something in her mind kept her from jumping.  She finally asked me to count her down. In the video, I was able to slow down the moment that will forever be etched in my mind.  Emily jumped.

Emily came flying across from the other side.  She landed right in front of me and my instinct kicked in: I grabbed her left arm because it was closest to me.  Unknowingly, I pulled her left arm out from underneath her, and Emily had intended to use that arm to push herself up off of the rock she landed on.

Emily landed safely.  She wasn’t in danger of sliding down the formation because she hit the landing spot, and her momentum carried her forward and up the low slope of the rock.  She had made it! Tears of joy, excitement and the adrenaline dump washed over her. We laughed and I pulled her into my arms for the congratulatory embrace that only a loving father can give to his daughter to help her feel safe.

I know someone is reading this story and thinking: “She made it.  Big deal. So what? You don’t know my situation. You don’t know my trouble.  I look to God for help and there isn’t any. He doesn’t hear me, and I’m not sure God knows I’m here.”

My friend, look up.  Not skyward, but get your eyes off of yourself.  Look around you. Do you see the sky? Do you see the grass?  Do you see the sun, moon or stars? God made all of this to remind us all that He loves us.  Trust him. Obey him. Not so you can “make it” in this world, but so that you can “stick the landing” and walk into the loving embrace of a Father who will say “You made it!”

Blessed is a man who endures trials, because when he passes the test he will receive

the crown of life that He has promised to those who love Him.  (James 1:12 HCSB)

Prayer to the God who never fails

“Father, thank you for loving us more than we can ever imagine.  Help us to trust you and obey you, even when we think we are not worthy.  You have called us to follow you and to keep our eyes on You who made the heavens and earth, the sun, moon, and stars, and everything that we see.  Thank you for your promises that are true and have never been broken. Thank you that your love never fails, even when we do. For your beautiful name we pray, amen.”

Other articles by David Shelton

Posted in Spiritual Growth and tagged courage prayer, you can make it prayer