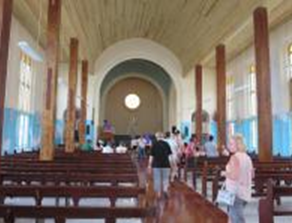 The current church was built in 1944 when the original structure built in 1836 was destroyed by a hurricane. The large stone and brick sanctuary feels like a haven owing to it’s simple interior design with wooden barrel vaulted ceilings held up by stout wooden columns. The walls are painted a vibrant blue half way up and the weathered windows are perpetually opened to gain ventilation for those sitting on the pews that have open bench like backs. The interior has very little decoration with the exception of a round stained glass window at the back of the altar area which our guide said could represent a compass of a ship.
The main attraction of the sanctuary is significant cultural and spiritual history experienced by the congregation on this spot. William Knibb was a minister in the 19th century who preached to the enslaved Jamaicans and worked to better their lot in life. After a rebellion, he returned to England where he lobbied for the abolition of slavery in the British colonies. The law was passed and in 1838 final emancipation. According to our local guide, a service was held in the church on the eve of freedom. A coffin representing slavery was displayed in the altar area and then taken out to signify the death of slavery. The coffin bench was on display at the front of the church when we visited.

Of equal or greater significance, from 1838-1845 a revival broke out and William Knibb personally converted 6,000 during a time when 22,000 former slaves became Baptists.

How I used this place of prayer
We were on a tour and while seated in the sanctuary awaiting the talk to begin, I silently prayed for the congregation and their continued ability to reach out to those in the area who were poverty stricken and in need of hope.

Personal Tips
There is no air conditioning in the church, so dress accordingly. Our guide, who happened to be a member of the church, described their worship service as a very lively time of praise and worship that sounded very much like the type of contemporary worship services with drums, guitars, etc.