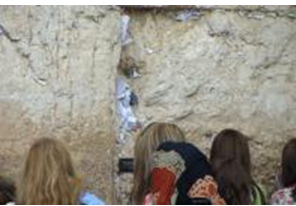 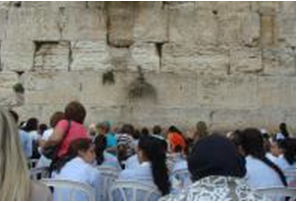 Description
The Western Wall or Wailing Wall in Jerusalem is used as a place of prayer by those of all nations. The wall is on a large plaza and is divided into a men’s section and a women’s section by a partition. The wall itself consists of huge stones which are part of the retaining wall for the former Jewish Temple which was the center of worship for Israel for centuries. Now worshipers write prayers on small pieces of paper and insert them into the cracks in the wall. In the women’s section there were plastic chairs in which women may sit and pray facing the wall as well as a bookshelf full of prayer books of all languages and types. Here people pray silently and some rock back and forth as they pray to add their whole body to their prayers. Many touch or kiss the rocks.

How I used this place of prayer
I had two requests written down on small scraps of paper and worked my way into a spot amongst Israeli school girls who were praying at the wall. After placing my requests in a crevice in the wall, I stood in silence with my hand on the wall and felt God’s presence in a very strongly emotional way. I was surprised when tears came to my eyes and gathered there with women from so many nations and backgrounds I felt God’s great desire for all people to know Him. I then took a seat in one of the plastic chairs and allowed myself to feel the presence of the prayers all around me. It was the one place in Jerusalem where I felt the very closest to God.

Hours of Operation & Admission Requirements
Must go through a security scan before entereing; Women must be modestly dressed. Men must cover their heads.

Personal Tips
There are water stations with faucets and pitchers for ritually washing hands if you desire. We visited at the end of September and I was very surprised at how easy it was to get close to the wall. Women were about 3 deep; on the men’s side there was much more room and it was much easier to get near the wall.

There is also a 24 webcam on the Western Wall so you can visit it virtually from anywhere in the world.