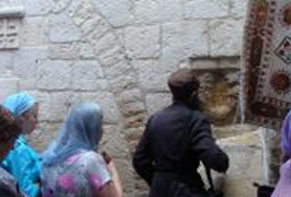 Type of Prayer Place
Prayer Walk, stations of the cross 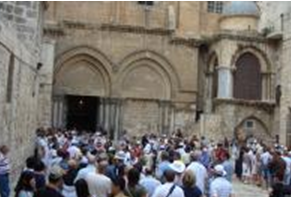 Description
The Via Dolorosa means the “Way of Sorrow” and is a route through the old city of Jerusalem that commemorates Jesus Christ’s passion and death. Along this route are 14 Stations of the Cross or places where Christians pause and remember various parts of Christ’s suffering and death. It begins at Station I inside the Lion Gate near where Roman fortress once stood where Jesus was condemned. The route then winds through the streets pausing to remember Christ’s flagellation, carrying the cross, being nailed to the cross, being stripped of His clothes, being crucified, dying and being placed in the tomb. The stations themselves vary from churches to plagues on the walls of the buildings along the narrow streets. It ends at the Basilica of the Holy Sepulcher where the last 5 stations are located. 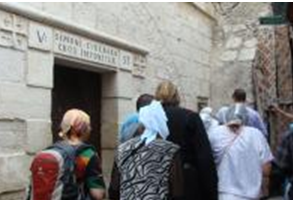 How I used this place of prayer
Since I was on a very short tour with a large group and a Jewish tour guide, we did the Via Doloroso backwards, beginning at Station 14 in order to make it easier, downhill walking. This made it more difficult for me to gain the sense of pilgrimage I had hoped to experience. However I was able to experience moments of closeness to God when seeing other groups of pilgrims such as a group of Brazilians singing and carrying a life size cross up the street. Also, I was able to spend a few moments of prayer and contemplation off the busy street in the courtyard of the Chapels of the Condemnation and Flagellation.

Personal Tips
You can purchase a fold-out color brochure of the Via Doloroso from a street vendor inside the Lion’s Gate for one dollar. (Most vendors accept U.S. dollars) Not only does this explain more about each Station, but it also has a map that will help you know where to turn to keep on the route. 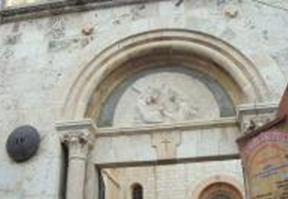 Also be aware that the route takes you through narrow streets full of stores with merchandise and signs spilling out into the streets and hanging overhead. The streets are also crowded with merchants, shoppers, residents, tour guides with large groups trying to stay together as well as groups of pilgrims, all speaking various languages. Instead of trying to block this out, I decided to embrace the chaotic, noisy character of the streets as an authentic part of what Christ might have experienced carrying his cross toward Calvary among people who were going about their business with no clue that something of eternal importance was taking place close enough for them to reach out and touch.

The brochure I purchased shows a large crowd gathered on Friday afternoons at 3:00 when the Franciscans lead a procession of the devotion of the way of the cross. Hundreds may gather for this depending on the season, so plan your visit accordingly.

It’s easy to get lost on this walk, which we did.  None of the local residents seemed willing or able to direct us to the correct path, which could have been due to the fact that we were in their way because  Friday prayers at the Dome of the Rock were about to begin and many residents were rushing to attend.  We missed several stations leading up to the Church of the Holy Sepluchre where the final stations are located.  If you get lost, look up for the dome of the Church of the Holy Sepluchre and head in that direction.