Every day we carry baggage and burdens in our emotional and mental backpacks.  Here is a prayer that helps us actively unpack our stress, fears and guilt via prayer.

This prayer was written and used by Dr. Emmett Diggs as a congregational prayer.   The last time he led the congregation in prayer had been two days after the Newtown tragedy where twenty children, five and six years old, and six educators had been senselessly murdered by one crazed gunman.  Dr. Diggs began the prayer time by saying, 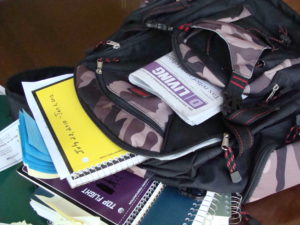 “Relatively speaking, with respect to my last prayer with you following the Newtown tragedy, there’s not much to pray about today.”

Then he began exploring out loud for congregational meditation the kinds of prayers we might need on ordinary days when there are no dramatic headlines in our lives and world.  Here is his prayer:

But yesterday, at the tennis courts, a rather oversized atheist was bragging about being an atheist again.  “You preachers don’t know what to do with us, do you?  We drive you crazy!”

But really there’s not much to pray about today.

Later that same day a pretty young woman sat outside of Atlanta Bread where we were eating, illegally drinking a glass of wine and smoking one cigarette after another.  She blew the smoke out of her mouth and the wind blew it back into her face.  After each cigarette she flicked the butt into the nearby shrubs.

But, really there’s not much to pray about today, is there?

I told the atheist that out of sixteen men here he was the best evangelist among us.  I hadn’t heard a single believer proclaim anything about their faith.  Everyone laughed.

But there’s not much to pray about, Lord.

And as Patty and I left Atlanta Bread, I paused to share with the pretty young lady, still flicking her cigarette butts, “You know, I’ve been a minister for more than forty years and the worse deaths I’ve ever seen were lung deaths.”  As quick as flicking a cigarette butt she grasped a glimpse of that truth.  She went into frantic explanation about how hard she was trying to quit.  How often she’d tried.

But there’s not much to pray about today, Lord.

I mean, you brought to worship in your backpack that you carry around every day and everywhere, hidden burdens, heavy psychological loads, fears, hopes, joys and pain.

That being true, why do we live in a world of separation, isolation and false pride?

Ought not prayer be a main street on which we travel together and share together?

Shouldn’t prayer be a way of unpacking hidden burdens and heavy loads? 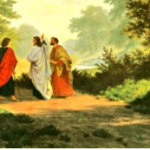 Should it not be a main street named Emmaus where we meet a Stranger that we want to teach and who ends up teaching us?

Now in this prayer, I dare not be this Stranger, but I do dare to invite you to walk and talk with Him.  I remember that Stranger’s name was… was Jesus.  They asked Him, and we continue to ask, are you the only person around here who doesn’t know what’s happened?  Turned out He was the only one who did know.  Teach us the truth about Him this morning for it is to Him we go this morning in prayer.

Now, bow down, close your eyes and get in touch with your own backpack.

Remember that Stranger on Emmaus Road now… what He once said, “For my yoke is easy and my burden is light.”  (Matthew 11:30)

But we can’t have that, because our backpacks are full of frenzy, what we call urgent things, things, things.  Help us to unpack, empty ourselves of frenzied trivia and then to repack our backpacks with renewal, deeper relationships and a well-spring of wholeness.

Help us to discover a transcendent now, where stress can be discarded and we can walk through the doors of Kingdom living.

Help us beyond our “hangovers” from clinging, and to let go of all that weighs us down so that we can run the good race toward spiritual freedom.  To let go of the hangovers of guilt, fear and selfishness, to relax in this time of transcendent freedom.

Teach us to be careful where we invest lest our treasures of trivia, rust, and thieves come to steal what we thought was important to keep.

And finally, teach us that love is sacrificial, that mission does not begin only at home but begins wherever need is found and that discipleship is our vocation.  That means we must be sensitive to the pathos of the present so that feelings of tenderness, sympathy and sorrow may be aroused for all who are less fortunate than ourselves. 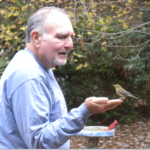 Emmett Diggs is a retired minister who holds a doctorate in psychology and personality development. Before becoming an ordained minister Emmett worked in a variety of settings including as a sociology and psychology teacher, the director of a Half Way House and the founder of a youth intervention program. He currently serves as a Bible teacher, and assists as a minister and pastoral counselor as the need arises. He and his wife Patty have 5 children and 10 grandchildren.

← A Prayer for Order When You Need to Know How to Manage ChangeHow to Love God Using the Spirituality of the “Little Way” of St. Therese →