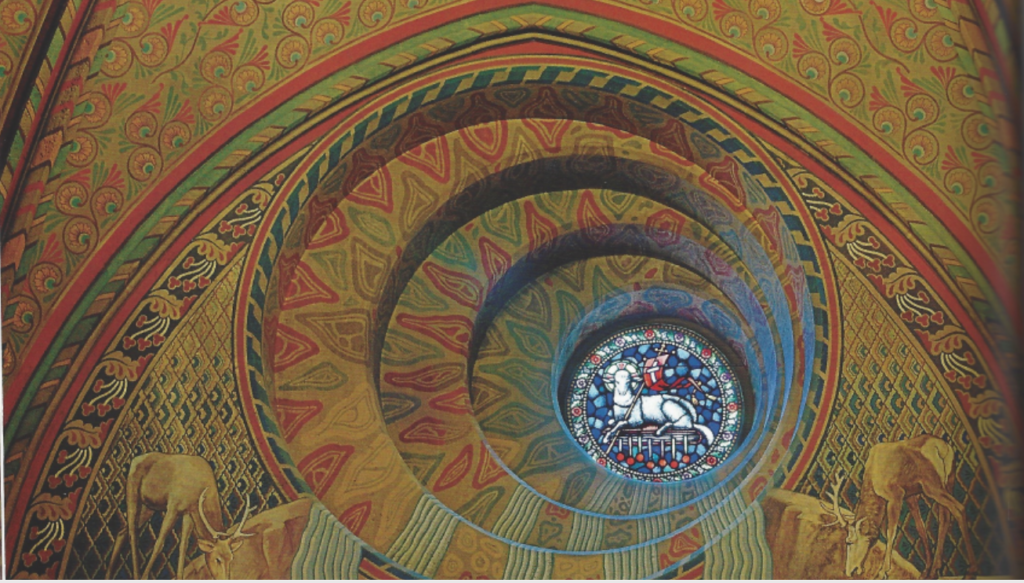 One easy one to stay connected to God while traveling is to use artwork you see in places you visit as a means of Christian meditation while traveling.  Such artwork can be found in churches, museums, public squares, monasteries, palaces and in government buildings.   Here are some secrets I learned from my travels.

Recently I was in St. Stephens in Vienna listening to a recorded tour telling about the carved stone pulpit spiral staircase.  There on the stair railing was a strange procession of carved stone lizards and frogs! 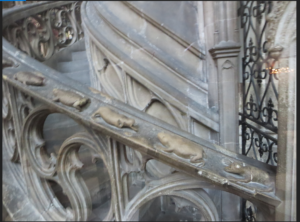 The narration said that the Gothic stone carver had done this to symbolize that when the priest went up the staircase he was spiritually moving upward, trying to leave behind his sins and the earthly things that were weighing him down.  The frogs and lizards have their mouths open, snapping and trying to bite  each other on their way up with the priest.

Then at the very top of the railing I noticed an even stranger remedy.  There were two small carved  dogs gobbling up the frogs and lizards before they could reach the top!

As you encounter a new sight or story, ask yourself what message, lesson or idea God might be sending you

When using art as a natural means of Christian meditation while traveling, a good method is to ask yourself what surprises you, draws your attention or causes you to think in new directions.  In my case, the frogs and lizards were plenty interesting, but it was the dogs at the top who caused me to wonder.

The thing that drew my attention was the idea of the dogs eating frogs.  First of all, the dogs weren’t big or fierce looking.  They looked more like lap dogs. Secondly, they weren’t trying to take on all of the frogs and lizards at once.  They were only gobbling up the next one in line.  Thirdly, it wasn’t human power that was overcoming the frogs and lizards.  Nor was it an angel with a sword.   It was simply a natural, God-created solution taking care of the pests.

Applying the Christian meditation while traveling to your life 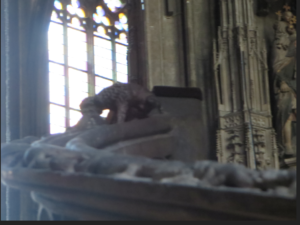 As I meditated on the little dogs, I decided that this idea of God providing a natural way to stop distractions and worries from keeping me from connecting to him through prayer would be very helpful.  I decided to remember this visual image and to name each little worry like a frog or a lizard crawling up the railing when I was having a hard time leaving my worries behind.  I imagined God taking control of them so I could continue to climb upward.

By taking these few simple steps of asking myself what surprised me about the carving and what new insights God might want me to gain from it, I was transformed for a few moments from a tourist taking pictures to a faith seeker looking for a personal message from God.

In another instance, I was in the Mathias Church in Budapest where the entire interior is painted with colorful designs and artwork, so much so that it’s hard to see it all.  As I wandered toward the back of the church I was struck by a round stained glass window showing a lamb with a halo symbolizing Jesus, the Lamb of God. 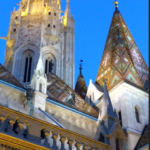 What was unusual about this window was the setting.  The architect had placed it in something like a spiraling telescope of circles that became larger as the circles whirled out toward the interior wall.  Inside these swirls the artist had painted streams of water that rushed out and spilled onto the interior walls.   On the interior walls were two deer on each side with their mouths opened ready to drink the water.

Because this setting was so unique and I’d never seen anything like it before, I found myself being drawn to wonder and meditate. 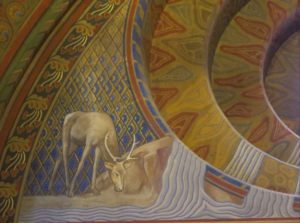 Under the paintings of the deer was a sentence written in Hungarian which of course I couldn’t read.  Since I couldn’t read the words, I decided to “read” the symbolism instead and search my memory of Scripture.   Several Bible verses came to mind forming around the phrase, “Streams of life giving water.”  I remembered how Jesus invites all who are thirsty to come to him and drink freely.  When I looked up the verse later here’s what I found it says, “Jesus stood and said in a loud voice, ‘If anyone is thirsty, let him come to me and drink.  Whoever believes in me, as the Scripture has said, streams of living water will flow from within him.’  By this he meant the Spirit.” (John 7:37- 39 NIV)

And since there were deer in the painting another snippet of Scripture came to my mind, “As the deer pants for streams of water, so my soul pants for you, O God.  My soul thirsts for God, for the living God.” (Psalm 42:1,2 NIV)

Both of these scriptures seemed to come alive and speak to my thirsty soul as I looked at the painting. 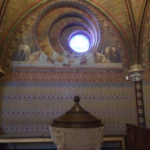 As I was standing enjoying the beautiful window and painting, another tourist who spoke English stopped to admire the artwork and I remarked to her about the beautiful symbolization of the life giving water.

I was quite surprised when the woman said to me, “How fitting that the baptismal font is right in front of it.”

Baptismal font?  Until the woman pointed it out to me, I had totally missed that this artwork wasn’t just wall décor but was rather a setting for an actual church sacrament where we are washed from our sins and born anew into God’s Kingdom!

The church happened to have a small gift shop and I went inside and asked if they had a guidebook in English explaining the church artwork, particularly the lamb window with the water and deer.  The Hungarian clerk  spoke English well and she was able to help me find a color guidebook with photos of many of the pieces of artwork in the church, including the  window.

I asked her to translate for me the words under the window and she said, “As a deer pants for the water so my soul longs for thee” – one of the Bible verses that had come to my mind as I studied the artwork. 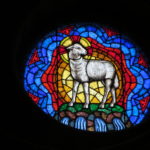 The guidebook said, “The deer drinking from the rivers symbolize humanity thirsting for salvation.”  This one sentence to me was worth the price of the guidebook and had me further meditating with thankfulness for God’s free gift of salvation to me.

I make it a practice to look for guides to churches and cathedrals when I enter.  In the case of major cities in Europe, you can often find these guides in several languages.  Simple pamphlets are often free.  Other guidebooks can cost a few euros.  Some churches also have audio guides for rent for a small fee and others conduct guided tours.

Before traveling, read up on and practice using art as a means of Christian meditation while traveling

Before leaving home, take a few minutes to try the easy steps of Christian mediation.  The basic steps are:

Find an interesting piece of art

Look at the first thing that catches your eye

Study the details of the whole image

Ask yourself what feelings it evokes, what does it reveal about God or your life?

Be on the lookout for the different ways that different cultures interpret the same themes of the Christian faith.  A fascinating place to see these differences is in the court yard of the Basilica of the Annunciation in Nazareth, Israel.  In this courtyard, 43 different nations donated mosaics of depicting Gabriel announcing to Mary that she has been chosen as the mother of Jesus or Mary holding baby Jesus. 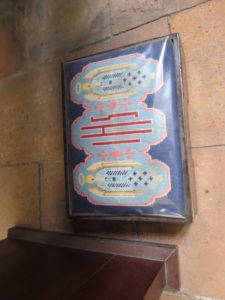 While visiting churches in other countries pay attention to small things such kneeler pads.  For instance, in St. Andrew’s Cathedral in Singapore, when I sat down in one of the pews to take in the beauty of the sanctuary, I noticed that under the pews there were individual kneeling pads.  Each had been cross -stitched with a unique Christian symbol.  It wasn’t hard to imagine that these might have been hand made by church members.  And what if you thought about the symbolization of the one you were kneeling on as you prayed, thinking of the special grace it symbolized.

As an example, one I photographed had two stylized angels on each side with the letters HIS in the center.  I had seen these same letters in the middle of the cross in my small home church growing up.  (I later learned they stand for the Greek letters that spell Jesus.)

You don’t have to travel around the globe to take a moment to visit a place that provides an opportunity for Christian meditation.  As an example, when we visited a small town in the mountains just a few hours drive from our home, I stopped by a small country church yard.  For security reasons, most small churches such as this one aren’t kept unlocked for visitors and this one was no exception.   However I still spent a refreshing half hour walking around the church grounds, visiting the small cemetery and sitting on a bench in a small church garden enjoying the beauty and quiet of nature.

As a rule, in small to medium size towns, the churches most likely to be open for visitors during the day are often Catholic churches which make it a practice to welcome people in for quiet meditation and adoration.  You will be extremely surprised at the beautiful stained glass windows and other artwork found in most every town or city. 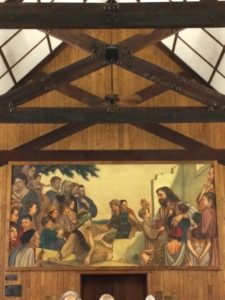 Also, look online before your travels to see if there are any unusual local churches of interest.  As an example, when we were visiting friends in Western North Carolina the ladies decided to go on an outing to a small place in the mountains called the Crossnore School that was a school for Appalachian children.   We visited a thrift shop and a handcraft store and then a visited the small church on campus that featured a fresco entitled “Suffer the little children” showing Jesus welcoming children which were modeled on actual children in the school.   It’s part of the Benjamin F Long IV Fresco Trail that includes nine frescoes in six locations in the NC mountains and foothills.

Once you gain a little experience in using art as a means of mediation, you can enjoy using moments during your travels anywhere and enjoy personal worship times to connect with God in meaningful and unexpected ways.

Other articles of interest

How to Do Christian Meditation Using Art

How to Do Meditation in Nature in Christian Meditation