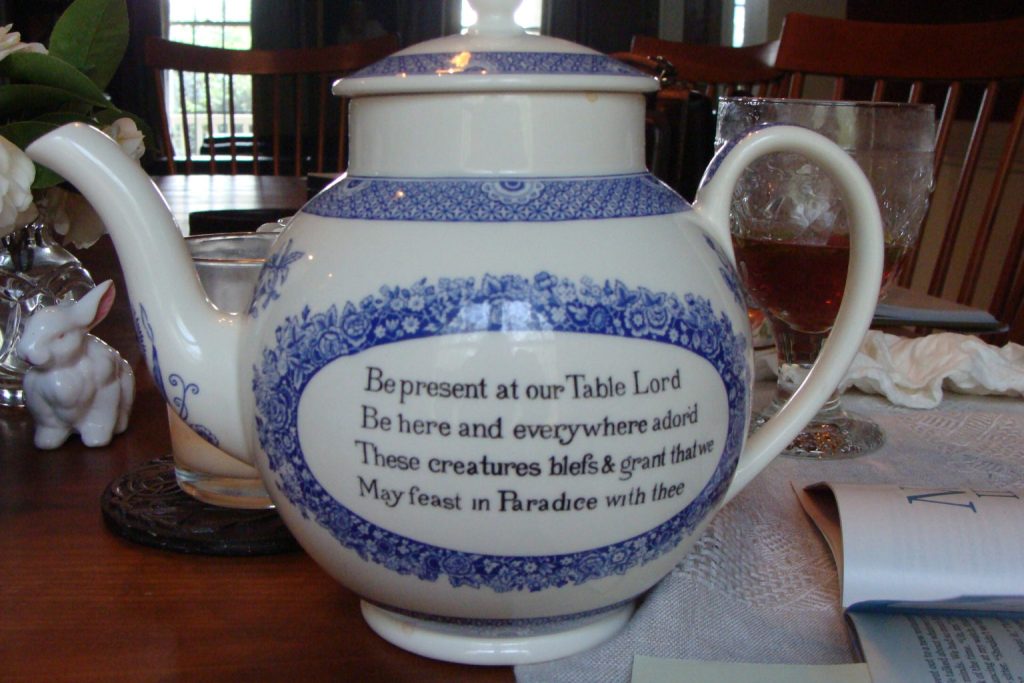 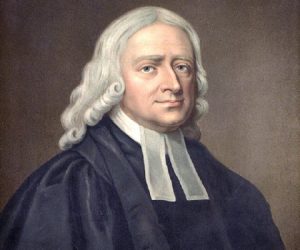 The John Wesley Teapot has two table blessings on it, one on each side.  One blessing is said or sung before the meal and the second is said or sung after the meal. (Use the tune of the Doxology also called  the hymn “Old 100” which is a hymn based on Psalm 100.)   The prayers were written by John Cennick, an 18th century lay preacher and first published in 1740.

Blessing before the Meal 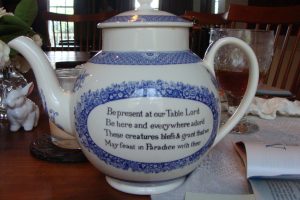 Be present at our Table Lord

Be here and everywhere ador’d

These creatures bless and grant that we

May feast in Paradise with thee.

Thanks after the Meal

We thank thee Lord for this our food

But more because of Jesus’ love.

Let manna to our Souls be given

The bread of Life sent down from heaven.

History of the Teapot

In March of 1760, John Wesley, the founder of Methodism, preached at Burslem, England to the pottery workers.  While there Wesley spoke with Josiah Wedgwood who was working in his home garden next to the factory.   A year later Wedgwood made a special teapot that would hold a gallon of tea!  (Wesley drank copious amounts of tea to keep up his energy levels in his ministry labors.)

The decorations on the teapot were symbolic of the national flowers of Scotland (thistle), Ireland (shamrock) and England (rose.)  The decorative pattern was inspired by blue calico of his future wife’s dress.)

The prayers were written by John Cennick, who was the headmaster of a charity school founded by Wesley called Kingswood School.  The custom of singing thanks before and after a meal originated with the Moravians, through whom Wesley experienced his personal conversion.

The teapot was first reproduced in 1908 by a woman named Anna Onstott (later nicknamed “Teapot Annie”) who engaged Wedgwood to produce reproductions that held a quart of tea.  She introduced them to Methodist churches and women’s groups  where they were used as outreach tools and fundraisers for missions.