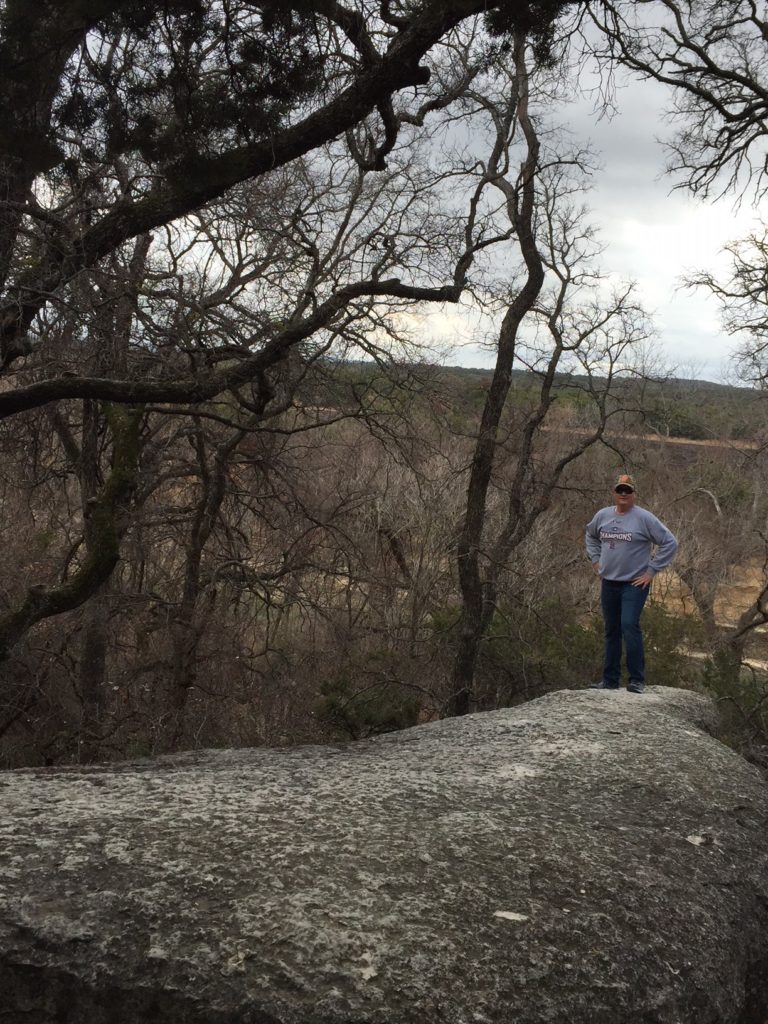 This taking a leap of faith prayer will help you take the next sometimes scary step God has for you when you need rescue or when God is asking you to take a bold move in your life.

I stood on the rock overlooking the Paluxy River and found myself 25 feet above the river bank. The giant rock had broken off from the rest of the hillside, but being embedded in the dirt the rock was not going anywhere anytime soon.  I had to jump to get across to the rock and then promptly walked out to the furthest point to take a look over the side.  On this balmy January afternoon Kelly and I were out in another state park in Texas.  We had made it to Dinosaur Valley State Park where dinosaur prints were discovered in 1908.  Our adventure out onto the hiking trail led us to this rock formation and me perched on the edge.

How many times have you and I been out on that rock?  We find ourselves not between a rock and a hard place, but on top of the rock out on the edge with nowhere else to go.  To step off is certain disaster and possible death.  Or is it?

How did I get out on the rock?  I jumped.  I had to jump across a small chasm that was about four feet wide.  Prior to being on the rock I had been out on numerous ledges taking in the beauty of the views from being high up above the river valley.  I was in an adventurous spirit and did not hesitate to drop my backpack and leap over to the rock.  How many times have we been in situations where we drop what we are doing and race out to a potentially hazardous situation.  The only danger of me falling off the rock would have been a misstep or I all of a sudden have a heart attack and lose my balance.  The likelihood of that happening was very small.

Ask the Good Shepherd to help you get off the edge

Back to my question: What do we do with haphazard abandon that puts us out on the edge in a dangerous situation? Questions start flying that usually begin with “How did I get here?”  “Where did I make the wrong turn?”  Bugs Bunny used to say, “I knew I should have taken that left turn at Albuquerque” when he found himself lost.  That’s me at times.  I’m pouring over the map of life trying to figure out where my Albuquerque is and trying to retrace steps to get back on track.

Sometimes we can’t find where we are.  We are out in the middle of nowhere perched on the edge of a rock and Siri is not going to be able to get us directions to get out of there.  What do we do?  Who do we turn to?

“For the Son of Man has come to save the lost. What do you think? If a man has 100 sheep, and one of them goes astray, won’t he leave the 99 on the hillside and go and search for the stray? And if he finds it, I assure you: He rejoices over that sheep more than over the 99 that did not go astray.”  (Matthew 18:11-13, HCSB)

If any man attacks my wife physically or verbally I will come back at him with a fearsome force to defend my wife.  If any woman attacks our marriage and tries to isolate me, I get in contact with or go back to wherever my wife is as fast as I can.  I have an amazing wife.  Kelly loves me deeply.  She loves me openly.  According to a family friend, Kelly loves me so much it’s silly. There is nothing in this world that would make me want to give that up.  No other woman can ever take her place because no other woman would love me like Kelly does.  I will fight, bleed and die for her.  She will love me more than any other.  Why would I want to throw that away?

Back to God rescuing us from the edge: Let the Good Shepherd pull you back from the edge. Let him lead you to safety.

“God, hear my cry; pay attention to my prayer. I call to You from the ends of the earth when my heart is without strength. Lead me to a rock that is high above me.”  (Psalms 61:1-2, HCSB)

The rock you are on is not that high.  There is a rock higher than yours.  In the above Psalm King David writes out a prayer anyone can pray when feeling as though you are out on the rock that seems to be an impossible situation.

Know this: Jesus is the rock that is higher than the rock on which you find yourself stuck.  He himself is a rock.  Not just any rock, but the cornerstone of our foundation:

“Therefore the Lord God said: “Look, I have laid a stone in Zion, a tested stone, a

precious cornerstone, a sure foundation; the one who believes will be unshakable.”  (Isaiah 28:16, HCSB)

My marriage to Kelly is unshakable because I believe that Jesus is who he says he is, and I believe he is the Rock.  And I know something else: Jesus will come to me.  Remember the Good Shepherd verse quote previously?  He will come looking for you out on the rock and will rescue you.  Because we have built our marriage on that Rock, our marriage will not be moved. No outside force can separate us.

Maybe your rock isn’t a physical place.  Maybe it’s a situation.  God is still God in that particular situation.  But this brings up another possibility: He may tell you to jump.

There are a couple of old jokes I could insert here about people being in places where the punchline involves jumping or letting go and God will catch you.  I’ll spare you those jokes my dad told to me.  They would likely make you groan.  But you may be told by God to “jump” or “let go” in your situation.

My experiences with jumping off the edge

For a number of years I wrestled with the thought of writing a book.  I even started one book, but never finished writing it.  I started writing a fictional book, but that too only lasted four chapters. God was prompting me to write, but I couldn’t figure out what to write.  I finally approached PrayerIdeas.org Editor-in-Chief, Karen Barber, and asked her what she thought about the idea of my writings from the website going into a book.  Karen grabbed her pom-poms and cheered me on into compiling everything for the book.  I am pleased to say that “Simple Prayers For Men” will be published in 2018.

Here’s the real story: In 2017 I heard the distinct voice of the Spirit say to my soul, “Write the book.”  He might have well said, “Jump off of the rock.”  Folks, writing a Christian book is a scary thing.  No one wants to be theologically incorrect, and no one wants to fail at writing a book designed to help others.  But it was time for me to jump.  I took the bold step of announcing to my family that my goal for 2017 was to get the book published.  That didn’t happen in 2017, but by the time 2017 was finished and 2018 had started, I was deep into the editing process and had also enlisted the help of my close circle of friends around me to keep me accountable to a deadline to turn in a manuscript as soon as possible.

What impossible thing has God asked you to do?

What rock are you standing on that God has quietly asked you to step off of out into the great unknown?

We all are in one of two categories:

Category 1: Rescue – You are in a dangerous place and need the Good Shepherd to rescue you.  He will come to those who need rescue, but it requires that you trust him.

Category 2: Action – You are in a place where God is asking you to do something bold, way out of the ordinary for you, but it requires that you to trust him.

In both situations God will not fail.

“Be strong and courageous; don’t be terrified or afraid of them. For it is the Lord your God who goes with you; He will not leave you or forsake you.”
(Deuteronomy 31:6, HSCB)

I will teach you about God’s power. I will not conceal what the Almighty

Which category do you find yourself in?  What is God asking you to do?  Are you waiting on the Good Shepherd to find you or has he asked you to take a flying leap of faith?

Taking a leap of faith prayer

“God sometimes you ask us to do what we believe to be the impossible.  Sometimes we need you to come and find us because we have gotten ourselves into impossible situations.  Thank you for being the Good Shepherd who finds his lost sheep.  Thank you that if you tell us to jump off of the rock you are right there with us as we take that leap of faith.  Give us the courage to wait on you, but also give us the courage to act when you tell us to act.  Thank you that your promises are true, and that you are with us…always.  In your son’s name we pray, amen.”

Other related articles by David Shelton

Prayer for God’s Strength One Step at a Time

Living and Praying a Thankful Life