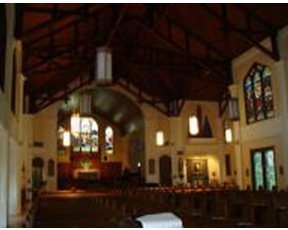 Description
St. Paul’s Episcopal is an historic church that is a haven for prayer and meditation on busy Duval Street, the hub of tourist and shopping in Key West. On the day of our visit in September, the substantial bright white concrete walls of the church played against the flaming orange red flowers of a tropical tree in full bloom, perhaps a Royal Poinciana tree. Once inside your eyes soar to huge wooden rafters and intricate stained glass windows bathing the church with heavenly light. Noteworthy to those interested in prayer time is a small prayer altar on the left aisle side of the church with a prayer box next to it welcoming requests for which the local chapter of the Daughter’s or the King pray. On the same left aisle side up front is another side prayer altar with cushions embroidered with U.S. naval emblems. On the right front side is another small altar area, this one depicting Mary and Jesus. Outside of the right of the church is a covered loggia which contains a large beautiful statue of Mary and Jesus in a tropical courtyard setting. Of other special prayer note are the matching stained glass windows at the back of the church of praying angel figures.

The church organist does a free noonday concert daily either on the magnificent pipe organ or on piano. The concert is free and open to the public and is very conducive to prayer, meditation and enjoying God’s presence. When I was there, even when the organ concert was not going on, meditative music was softly piped into the sanctuary, adding to the feel of being apart in a Holy place with God. 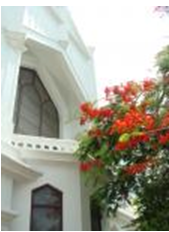 Knowing a bit of the history of this church also makes it a wonderful place to go when you need to pray for perseverance. The church was founded in 1831 and the building was totally destroyed by a hurricane on Oct. 11, 1846. A second building was completed in 1848 and this one was destroyed in the great fire of Key West in 1886. A third building which first held worship in 1887 was destroyed by a hurricane, on Oct. 11, 1909. The determined congregation decided to rebuild using concrete and the first services were held there in 1919. Unfortunately, by 1991 the church was facing a new threat of crumbling down when cracks began appearing in the walls and pillars due to the rusting and expansion of the steel rods in the concrete due to the sea water and beach sand used to mix it. A restoration of the church was completed in 1993 at a cost of a million dollars.

How I used this place of prayer
The day I visited St. Pauls we were on a vacation cruise with 2,000 others where places of solitude for prayer and meditation were practically nonexistent. This quiet oasis of such beauty and splendor was like a drink of cold water to my thirsty soul. After discovering the church briefly on a walking tour, I returned later to sit, pray, meditate and interact with the rich spiritual symbolism of the stained glass windows. It was Sept. 12 when I visited, so in honor of the memory of 9-11 I knelt in prayer on the kneeling cushions on the left front altar area with U.S. naval emblems on them in honor of our military and those who protect and defend our country.

Hours of Operation & Admission Requirements
Free admission. Open daily. According to their website: “Open daily for prayer, meditation and visiting.” 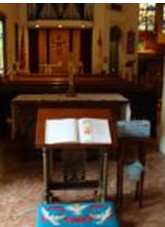 Personal Tips
The day I visited air conditioning was not in use, so dress according to the weather. Some of the stained glass windows opened outward into the streets, bringing in both air and the sounds of the streets. On hot days, earlier in the morning might be the best time for a visit.

The church was a fairly easy walk from the cruise ship dock, perhaps taking 10 minutes. It’s even a shorter walk back to the cruise docks if instead of taking Duval street you cut through the former Naval Station property where the Harry S. Truman Little White House museum is located. (Note: this is a private residential development where nonresident vehicles are not permitted, however foot traffic is permitted via the sidewalk gates.)