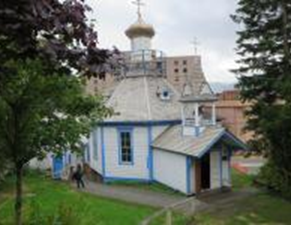 Description
The Russian Orthodox Church of St. Nicholas is a fascinating place to enjoy masterful religious icons and the mysterious ways of God. The church itself has a traditional onion type dome and was built in 1894 by local Tlingits who were given funding and religious artwork by the Russian Church. The native Tlingit clan became exposed to Orthodox Christianity during the Russian era of Alaska from 1741-1867. In 1892 an Orthodox bishop from San Francisco visited the natives and found them ready to join the faith. Clan leaders had been having dreams about a white-bearded elderly man who encouraged them to become Christians. Upon seeing an icon of St. Nicholas, archbishop of Myria, Lycia, they identified him as the messenger in their dreams.

The church itself is small and the Iconostasis or the large front screen of religious art that partitions off the altar area where the priests perform their duties takes up a large percentage of the church. Large windows trimmed with blue paint fill the interior with light and various icons also fill the walls, one in particular portraying hermit St. Herman of Spruce Island, Alaska who dedicated his life to worship and service to humanity. 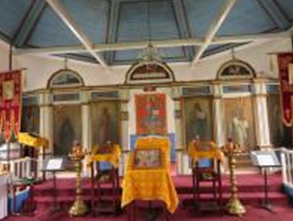 How I used this place of prayer
I spent time asking a local church member who was stationed in the chapel about some of the traditions and artwork. She explained to me the symbolism of the Orthodox cross with a small bar on the top representing the sign on top of the cross (INRI) the middle bar representing the where Christ’s arms were stretched during crucifixion and the slanted foot rest on the bottom.

Hours of Operation & Admission Requirements
No admission, though dontations are appreciated for the restoration of the historic building

Personal Tips
You can walk to the church from the ship docks by going north on S Franklin Street. When you get to the Red Onion Saloon, continue on S Franklin Street up a steep hill till you get to 5th Street. Turn right and you will be at St. Nicholas. It is around a 15 minute walk from the cruise terminal. The church member we met said that they usually have an intern in the church during the summer to allow tourists to visit the church.