Praying Your Problems into God’s Hands 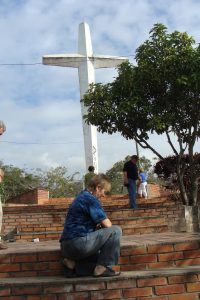 Whenever we have deep concern for loved ones or for ourselves, praying the situation into God’s hands is a way of helping us give up control and continue to trust, no matter what.  Here are some ways to do this type of praying.

I was introduced to the power of praying someone or something into God’s hands by an artist named Geri Gibson-Anthony whom I met on a cruise.  She was celebrating her remission of multiple myeloma, which is an incurable disease.   Geri told me she had a story to share and she described how seeing a mental image of God’s outstretched hand had helped her cope when she was in a surgical waiting room saying a desperate prayer that God would heal her husband Jack of lung cancer.

Geri and Jack had been married 39 years and he was her everything.  As Jack was undergoing surgery Geri grabbed her brother Don by the hands and prayed desperately, “Please God, I’m begging you to heal Jack.  I absolutely can’t live without him.”

As Geri was praying, a vivid picture came into her mind.  She seemed to see a large hand extended with the palm heavenward.  And in the palm of the hand was a tiny figure.  That’s Jack! Geri thought and he’s totally healed!  A sense of peace came over her and she told her brother, “God has shown me that Jack is in His hands.  Everything will be O.K.”

Jack wasn’t O.K. in the way Geri had hoped.  He died half a year later.  Geri spiraled into a deep depression of grief.  Several years later she was diagnosed with multiple myeloma.  One night while recovering from painful surgery, she saw the vision of the outstretched hand again.  This time, she was the one in God’s hand.  She said, “O.K. Lord, I’m in your hand.  If you give me the strength, I’ll try to paint the vision to share with others.”

Geri was only able to work for short periods of time, but as she painted and meditated she felt peace.  She searched the Bible for verses on God’s hand and memorized them.  Her favorite was this: “So do not fear, for I am with you; do not be dismayed, for I am your God.  I will strengthen you and help you: I will uphold you with my righteous right hand.”  (Isaiah 41:10)

After the cruise, Geri sent me a print of her painting which I now share with you at the top of this article.  Your picture of God’s hand may be different.  Close your eyes and ask God to show you His hand.

When Jesus was at the point of death on the cross he cried out in his final prayer in a loud voice “Father, into your hands I commit my spirit.”  (Luke 23: 46  NIV)   Then He died.  Matthew reports that Jesus felt utterly abandoned by God during his agonizing death.  Before this, He had cried out in a loud voice, “My God, my God, why have you forsaken me?”  (Matthew 27:46 NIV)

Feeling forsaken by God doesn’t contradict the idea of praying ourselves or others into God’s hands.  Both extremes are able to co-exist at the same time in the same life because God is there and He cares, not matter what comes next.

3.  Use “Into God’s hands” as your prayer of trust and dependence.

Putting ourselves or others into God’s hands via prayer signifies a vital connection from both sides.  We desperately need God because we can’t live through this without Him.  He stretches out His hand, letting us know that He is there, He knows what we’re going through and He will hold us up.  Our helplessness is all we have to offer and when we give it to God in prayer, we are transformed.  That’s because if we do not recognize our own helplessness we typically leave things in our own hands.

4.  Cling to the scriptures.

Just as Geri did, finding and meditating on the Scriptures about God’s hands can have a healing effect on our spirits.  Here are some other Scriptures to explore:

“Your hands made me and formed me; give me understanding to learn your commands.”  Psalm 119:73 NIV

“My own hands stretched out the heavens; I marshaled their starry hosts.”  Isaiah 45:12 NIV

Imagine yourself in God’s hands as you pray.  Or use your own hands in a prayer gesture that suggests that you are putting yourself and others into God’s hands.

As Geri found out, praying things into God’s hands doesn’t mean that things will turn out exactly as we had hoped.  Jack wasn’t healed here on earth.  The power of this prayer and the answering peace that comes is not dependent on circumstances being resolved.  Instead it revolves around the fact that God is in control.  He loves us.  He is there holding us up, no matter what may happen.  Our happiness no longer depends on what happens here on earth, but rather on the fact that God is present with us in a very real way, supporting us and loving us and taking care of the things over which we have no control.