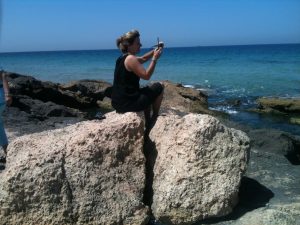 When recovering from divorce we often struggle not so much to believe in God, but rather to believe that He is there with us and loves us despite our feelings of being broken.  The following is a way to pray that helps us to eventually be able to ask for “Where are you God?” moments where we see Him at work in all circumstances.

How to pray this way:

1.  Use your “Nothing left” moments as your entry level prayer. Are you at that point?  The point where there is nothing left?  You’ve screamed at the ceiling, you’ve pounded the walls of the rat-trap that barely passes for an apartment calling out to God for the exact reason why your marriage failed.  You have sat staring into the night sky wonder how a God who knows every name of every star you see…yet He couldn’t hold your marriage together.  You have recounted your story time and time again of being served with those papers and the embarrassment, shame and misery they have brought.  You have told your story to strangers in the hopes of finding answers.  You have spent sleepless nights wondering how this could have happened and what to do next.  Begin by entertaining the thought that God was with you and that your questions and doubts and moments of emptiness were the start of a prayer dialogue with Him.  Why?  Because the Bible says: “God is near the brokenhearted; He saves those crushed in spirit.” (Psalm 34:18, HSCB)

2.  Ask God to help you believe Him. I have to go to God and ask for help, even help to believe, because I cannot do this on my own.  I get down, despondent, troubled, perplexed, agitated, and angry.  In those moments I have to summon the courage to say these words: “The Lord gives and the Lord takes away.  Blessed be the name of the Lord.” (Job 1:21)  They are hard words to say because there has to be belief behind them that God is in charge and that I do believe in Him.

For years that are unnumbered, God has been telling us the story of His love.  We have read of His might, works, wonders and love.  We may believe that there is a God who has, can and will do these things.  However, the question is really one of: “do we believe God?”  Not, “Do we believe in God?” but do we believe Him?

3.  Ask God to help you believe He has a plan for your life. Nothing surprises God.  Your situation in life did not catch God off guard.  He didn’t walk out of the room to get a cup of coffee, come back, find out what happened to you after the fact, then smack His forehead and start formulating a plan to dig you out of the hole you find yourself in.  He didn’t start chastising the guardian angel corps for dropping the ball while He was out of the room.  He is in the same place for your problem that He was when His own Son died: on His throne.

Do you really believe God knows you exist and that you’re in a world of hurt?  Do you still believe that He has a plan for your life?  Do you understand that this is not the end?

4.  Talk to God about your sense of failure and then listen as He tells you about why it doesn’t matter to Him. Failed?  You?  Your failures pale in comparison to more notable people who have failed.  Moses killed a man with his bare hands.  Peter denied Jesus three times.  Paul murdered those who he later came to call the “brother” and “sister”.  You’re playing Class “A” baseball compared to just these three and there are more.  The Bible contains sixty-six books of people who were failures and all of them are loved ferociously by God.  He loves you with the same ferocity.

Even as I write this I fear failing my wife and my kids.  God said don’t fear.  “For God has not given us a spirit of fearfulness, but one of power, love and sound judgment.”  (2 Timothy 1:7)

Do I believe God?  I have to.  I have nothing else.

There’s the crux of the matter: getting to know God.  We thought we knew God.  I have heard the story of an interview conducted with Billy Graham where he was asked, if he could go back what one thing would he change?  His answer: to know Christ better.

If the great pastoral icon of our time says that he believes that a better walk with Christ is the one thing he would change about his life, where does that leave you and me?  Here is a man who has proclaimed the Gospel to millions, read and studied the Bible more than most men ever will, written books about knowing God…and yet he desires to know God more.                “Get to know God.”

Take comfort in the words of Christ:

“Your heart must not be troubled. Believe in God; believe also in Me. In My Father’s house are many dwelling places; if not, I would have told you. I am going away to prepare a place for you.  If I go away and prepare a place for you, I will come back and receive you to Myself, so that where I am you may be also.  You know the way where I am going.” (John 14:1-4, HCSB)

6.  Pray “Where are you God?” every day expecting to find Him.

Three years after my divorce God introduced me to a wonderful woman named Kelly and we later married after much prayer.  From the very beginning of our relationship Kelly and I have had to call upon God to show us that He is still involved and interested in our lives.  We made a point in prayer to ask God to show Himself evident in the situation we found ourselves in.  Kind of a “where are You, God?” moment.   God answered.

As an example, before our marriage, Kelly was searching for a job in Texas.  It is a tremendous task to try and search for a job when you live 1499 miles away.  Kelly had applied to several school districts around the Dallas/Fort Worth area, but had not received any replies.  It was imperative that Kelly find a job because the house we had just purchased, which we felt God had provided and in which I was now living, was only affordable if we had a two-income budget to live on.  We reached the “fervent prayer” stage when Kelly, my folks and my kids all converged in a visit to the new house.  We had begun praying in earnest the Saturday before Kelly’s arrival about a teaching job.  “God, Kelly needs a job…like…now!  Where are You in this?”

Kelly arrived in town on Sunday.  On Monday she received a phone call on her cell phone from the Burleson ISD.  The Human Resources representative said “We received your application and would like to set up a phone interview.”  Kelly eagerly replied, “How about I come down to Burleson since I arrived in Fort Worth yesterday?”

Where was God?  Right there and in charge.  He had Kelly’s job set up.  He had the interview set up.  He had her flight to Fort Worth set up.   Even though we felt as though the situation was dire and borderline desperate, God showed up and showed His majesty and power.

Maybe you have faced the desperate moments of life.  You feel all alone.  In those quiet moments of desperation I have breathed a silent prayer under my breath that mirrors the plea of a father seeking help from Jesus: “I believe; help my unbelief.” (Mark 9:24)   The Master, full of compassion and mercy, gives freely from the abundance He alone supplies: Grace; abundant and free.  He knows.  The Savior understands and loves you beyond your wildest imagination.

My personal experiences and tips:

There is no right or wrong way to pray to God.  Make it a conversation.  Even through tears and sobbing He understands.  Though standing or sitting, walking or driving, in the morning or late at night God hears and, yes, answers prayer.   If you feel the need to pray for someone or something and cannot stop right then to pray, make a note to yourself so that when you can actually stop to pray you will not forget what it was you wanted to pray about.  Many smart phones have a great feature for making notes, and some will even e-mail you the note you created.  It’s a great way to start a prayer list.