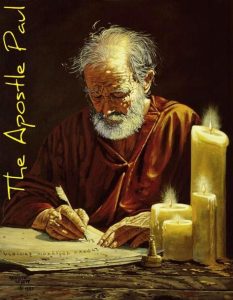 PRAYERS OF THE APOSTLE PAUL—Ephesians 1:15-23

V15-16—Paul is not simply content to see God’s people converted.  He wants them to grow in their faith so that is why Paul is praying for them.

A saint is someone whose life makes it easier to believe in God.

A friend of mine was raised in an angry family. Mealtimes were either silent or sarcastically noisy. Down the street was an old-fashioned house with a big porch where a happy family lived. My friend told me that when he was about ten, he began excusing himself from his dinner table as soon as he could without being yelled at, and walking to the old-fashioned house down the street. If he arrived during dinnertime, he would crawl under the porch and just sit there, listening to the sounds of laughter.

When he told me this story, I asked him to imagine what it would have been like if the father in the house somehow knew he was huddled beneath the porch and sent his son to invite him in. I asked him to envision what it would have meant to him to accept the invitation, to sit at the table, to accidentally spill his glass of water, and hear the father roar with delight, “Get him more water! And a dry shirt! I want him to enjoy the meal!”

Crabb goes on to say, “We need to hear the Father laugh. Change depends on experiencing the character of God.”

V17—Paul is passionate about what he wants God’s people to receive.

V18—what it means to know God.

Couples on the day of marriage simply have a legal contract but they are about to learn about each other intimately in all areas of life.

At conversion, we have a “legal contract” for a new relationship—v1-14 speak of what happens at conversion—v15-23 speak about developing intimacy with God.

John Roland is an ordained Southern Baptist Pastor who holds a Master of Divinity with Biblical Languages from Southwest Baptist Theological Seminary and served as a Senior Pastor for five years.