Here are some creative ideas for getting others in your church involved in actively praying for missions and missionaries.

People sometimes need something visual to help them remember to pray for missionaries.  I have seen many different objects used.  One ministry group gives out a “prayer favor” to each attendee at their meeting which were small craft items with the printed name of a missionary attached to it.  Attendees are asked to take these prayer reminders home with them and to place them somewhere like a kitchen sink window.  Whenever they see the object, they were reminded to say a short silent prayer for the missionary. 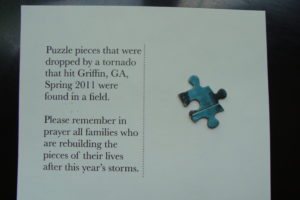 A puzzle piece as a prayer reminder

Here is an example of using an actual object from an area as a missions prayer reminder.  This group found jigsaw puzzle pieces left by a tornado and attached it to a card asking for continued prayer for the victims of the tornado.  On the front of the card is a picture of the barren landscape of uprooted trees with the words “Picking up the pieces…”

This idea can be used for any mission if you purchase a new jigsaw puzzle and tell about the mission or missionary and how prayer connects us all.

A Missions Focal Point In a Prayer Room or Chapel

Another good way to encourage prayer for missions or missionaries is to have a place where missionaries are listed or a small display that helps focus prayer.   Our church has a small wall shelf with items that have come from the mission areas we serve, such as a gourd cup from Honduras.  On this shelf is a small frame into which papers can be inserted to announce the current mission prayer emphasis, whether it be a mission team, missionary or a world concern.

Our church writes a number of cards with the names of those going on mission trips in the altar area before they go on a trip and members of the congregation are invited to come forward during the prayer time and take a card home so they can pray for the individual on the card.

Beyond the traditional prayer vigils for missions or missionaries, some Prayer Leaders use a prayer station approach.  A day or time is designated for prayer for missions and the prayer leader sets up various stations either around the sanctuary or throughout the halls of the church.  What is posted at each station can vary according to your needs.  One idea is to have the name, picture, a brief history and prayer needs posted of an individual missionary at each station.  The intercessors then move from station to station in a journey-like fashion as they cover each situation in prayer.

Intercessors may also be paired with an individual missionary.  They then become the “expert” on this missionary, receiving any newsletters or perhaps even being in email correspondence with the mission or missionary.

Praying Around the Globe

Chatlos Chapel at the Billy Graham Training Center at the Cove in North Carolina has a prayer room centered around a low, round table.  In the center of the table is a globe and on the floor are curved kneeling pads that match the contours of the table.  Having a globe as the center object of prayer is a very powerful way to remember those in the mission field.

Send Prayers with Those in Mission 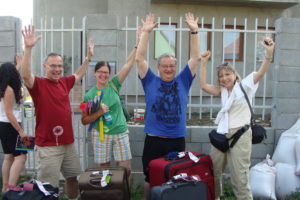 When I traveled on a mission trip to Romania, as we were leaving our leader gave us each small round plastic pill boxes with compartments for each day of the week.  He explained that the children in Bible school had written prayers and notes of encouragement for us on long strips of paper that could be rolled up and put in a compartment of the box.  We had one for each day of our mission trip!  I was surprised how much we actually used these unique prayer messages, especially when we encountered missed and cancelled flights and other problems and hardships such as lost luggage. Find out more about making a prayer pill box at this link.

My Personal Tips and Experiences

I have been the one who prays for those on mission trips as well as having been the recipients of prayer.  It is a true power that can be felt.  Out on the mission field  we encounter all sorts of obstacles and problems, both within ourselves and from the environment around us and from the forces of spiritual warfare.   Don’t let anyone go out unarmed and without strong prayer support!

The Biblical Origins and Traditional Roots of This Method of Prayer

The New Testament is a series of reports from “the mission field” and Scripture often records Paul asking for prayer and thanking others for praying for him.  See Ephesians 1:15-18; Ephesians 6:19,20; Philippians 1:3-6

Links to other helpful articles

← Ten Tips on PrayerDaily Prayer for Your Spouse →