We are often let down by people in our workplace and in our family. You might do everything right and then those you trusted on your team don’t step up to the plate and do their part. At times like that it’s hard to trust like it says in Proverbs:

“Trust in the Lord with all your heart, and do not rely on your own understanding; think about Him in all your ways, and He will guide you on the right paths. Don’t consider yourself to be wise; fear the Lord and turn away from evil. This will be healing for your body and strengthening for your bones.”           (Proverbs 3:5-8, HCSB)

My colleague’s surprising answer the day I unloaded my frustrations to him.

As I sat in the faux leather chair behind my desk in my office I felt very small. The words that were just spoken from the other side of the desk had pierced my heart like a spear. That moment will be frozen in time for me. My friend sat across from me with tears in his eyes. The words from his mouth were directed by the Spirit of God and hung in the air: “Do you trust God?”

My mind raced, “Of course, I trust God…I think. I’m supposed to, I mean, I’m a Christian and Christians trust God. Don’t they? That comes with being a Christian, right?”

I had just unloaded everything that had been bottled up inside me and I wanted someone to listen. I felt let down by my friends and felt an undue burden because of “those people” who didn’t come through when I needed them. My problems were mounting. I needed someone to care. Where were these people when I needed them most? Where was my family? Why didn’t one of my family members step up to the plate and help correct the situation?

As a small business owner I don’t have a manager or supervisor to report to. I own the business, but I do represent a larger company. It’s akin to being a franchise owner. If I had a supervisor or manager, it would be Omarr. Some people wonder why they get placed in certain places. I know the hand of Providence placed me in my business so that Omarr and I could become friends, and later find out we are brothers in Christ. The company I represent is filled with people who are Christians and live it out loud. Omarr is among them.

As we sat in my office, after I had unloaded and lamented why life was not being fair, the meeting about numbers and goals turned into a prayer meeting as I finally told Omarr what was on my heart. The one thing I wanted: rest. I want rest from my troubles, trials and labors of this world, but I know that I haven’t been called Home. I want to lean against my Father’s chest and listen to His heartbeat, close my eyes as that rhythm fills my hearing, and rest. We stopped, Omarr prayed, and the healing began.

Want rest? Place your trust in the right place. 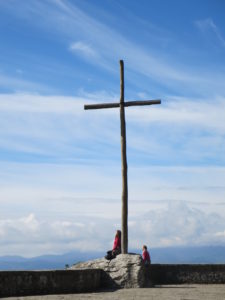 Is this you? The war of life is raging, sometimes violently. Day after day you fight on, but all you want is to rest. You’re tired of the fight. You’re tired of having to battle it out from the time you wake up, and then the battle does not cease, even when you finally drift off to sleep in exhaustion. That was me. Was me.

The following Sunday our pastor read the words of Proverbs 3:5 and I continued on to verse 8. They are important enough for me to write again:

“Trust in the Lord with all your heart, and do not rely on your own understanding; think about Him in all your ways, and He will guide you on the right paths. Don’t consider yourself to be wise; fear the Lord and turn away from evil. This will be healing for your body and strengthening for your bones.”           (Proverbs 3:5-8, HCSB)

Did you see it? Look back at where I had placed my trust. I was relying on man instead of God. People let me down. Why was I shocked? We’ve been letting each other down for centuries and it was a surprise to me!

“Trust in the Lord with all your heart…”

Focus. I lacked focus. Misplaced trust. I trusted in men.

I was not close to God. I felt far from Him.

Approaching God in prayer when you feel like you’ve been left on second base with no outs left.

In 1982, the St. Louis Cardinals were the best team in baseball and proved it by winning the World Series. I followed them closely because I wanted to play for them. I wanted to play second base next to Ozzie Smith, the “Wizard of Ahhs” at shortstop. Tommy Herr was the Cardinals second baseman at the time. I envied him. My lasting image of Tommy Herr, a switch-hitting player who was good enough to go to the All-Star game in 1985, was of him standing at second base with one foot on the bag looking down, hands on his hips, a bit of dejection on his face because there were now three outs. Alone on second base; Tommy had done his part, but it wasn’t enough. Second base is very far from the dugout when the inning is over and you have to jog back in. In reality, it’s not that far, but it seems a long ways away when things haven’t gone right.

That was me in life. I felt as though I was alone on second, but dejected because it wasn’t enough. I had done my part, but it didn’t change the outcome and my team let me down. That, my friends, is not the Christian life. That is not what Christ has called us to.

If you’re looking, searching for the answers to life, if you feel as though your Christian walk looks like a dejected runner at second base with no outs left, if you can’t understand why you pray and pray and nothing ever changes, maybe it’s because you are not focused on the One in whom to place your trust.

The new book “Moving Mountains” by John Eldridge[1] (author of “Wild At Heart” and “Fathered by God”) is a transformative book on prayer that has changed my prayer life forever, with the start of that change coming in my office chair. One paragraph from that book shows us that prayer is not what we have thought it to be.

“We know who he is and who we are. We know what is going on in the world. We understand the invasion, and that we are partners with God invoking the kingdom. We know prayer is not begging God, nor is it merely a zap. So, let us kill this religious deception with an axe and bury it forever. It was not given to us by Jesus.”[2]

To understand this paragraph requires 95 pages of reading or a summation like this: What prayer has been for most of us is not what God ever intended it to be. We are not outsiders to the Kingdom of God. Those of us called by His name have been invited into the throne room of God. We have been asked to be a part of the inner circle:

“I do not call you slaves anymore, because a slave doesn’t know what his master is doing. I have called you friends, because I have made known to you everything I have heard from My Father.”       (John 15:15, HCSB)

“Invasion”, “partners”, “invoking”, “not begging”…words not usually associated with prayer.

Do you cry out to God as if he is so far away that you must shout, hoping to be heard? The Psalmist said that God is “near to the broken-hearted.” (Psalm 34:18) When we pray we should be bold, as sons of the King, and in our hearts walk into the throne room of our Father and talk with him as his children and heirs:

“Let us then approach God’s throne of grace with confidence, so that we may receive mercy and find grace to help us in our time of need.” (Hebrews 4:16, NIV)

God as my loving Father

My issue with trusting God has been put to rest and the God of all grace and mercy has begun repairing my wounded heart.   I now go to God, not as some other-worldly being seated on a throne of majesty in a nebula somewhere way in the outer reaches of the universe, but as the Father of my heart who is eager to listen. He is waiting to hear me. He wants me to get to know Him better and understand how we are going to work together in any given situation.

I don’t make my children cry out and beg for scraps of food from my table. I make a place for them. I put out a knife, fork and spoon, a plate for their food, a cup for their drink (unless they insist on drinking from a can) and enough food for them to eat and be satisfied. Why would the God of this universe, whom we call “Father”, do anything less for his children? Wrap your mind around that thought and your approach to prayer will change. Learn to trust in God with all of your heart and allow him to direct your path in life. He will lead you places you never dreamed of going. He will also answer prayer in ways you never expected. Become that heir to the kingdom. Be who God called you to be: His.

Prayer When People Fail You

Father, God…you have made everything I see, and you hold it all together. You sit enthroned in majesty in the heavens, but you rule my heart from within. I give up. I give you everything. I let go of the things on this earth that I have made more important than you. I place my trust in you and remove it from men. Men will fail me. You will never fail. Give us today all that we need, and forgive us because we have failed you. Help us to forgive those who have failed us. Show us how to trust in you and lead us on your path of righteousness. Keep the evil one far from us and remove his work so that your kingdom may grow. You are the only God, Most High. We praise you and thank you. In the name of your son, Jesus, the Risen One, we pray. Amen.