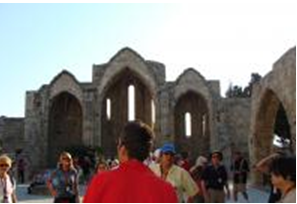 Location Name
Our Lady of the Burg church ruins in Rhodes, Greece

Description
Our Lady of the Burg is the ruins of a 14th Century Church built and used by the Knights of Saint John who operated a hospital on Rhodes for Crusaders. Today all that remains are several walls and a few broken columns. The most impressive part of the ruins is the front wall with three Gothic arches with inner coves featuring thin tall windows that let in light.

How I used this place of prayer
I set out on foot to try and find a place of prayer in Rhodes but had no directions and relied on looking for a church bell tower but came up with nothing during a stroll through the modern city outside the walls of the old city. Inside the old city, most of the old churches were closed up as they are no longer actively used by congregations. I finally returned to the ruins of this church and sat on a stone inside of one of arches within the front wall and it provided a small piece of shade and privacy from the tourists and a time to pray and reflect.

Hours of Operation & Admission Requirements
none

Personal Tips
The ancient city of Rhodes is unique in that within the old walls there is still an active population and there are many shops and restaurants. Also well worth a visit is the Palace of the Grand Masters which has many mosaics from ancient churches as well as statues and artwork. (admission is charged.)