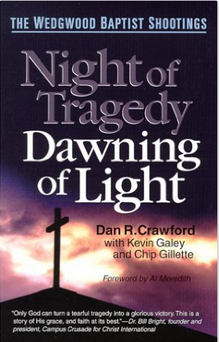 Description
Publisher: Shaw Books (March 7, 2000) This book addresses the spiritual battle which was taking place during the shooting. It covers the desperate prayers of the students under the pews and the healing prayers of thousands across the country as Wedgwood sought to be restored. This book has been very tough to read but God has used it to encourage so many. The authors did such a fantastic job of giving the reader a comprehensive understanding of what took place on Sept 15, 1999 during the shooting at Wedgwood Baptist in Ft Worth, TX and what followed. They did so by weaving numerous eye witness accounts. The picture they provide is very rich and inspiring. I am very grateful for their work and how they tell the world how Christ was proclaimed.

Review: This book helps shed light on the importance of prayer during and after mass shootings.  This is based on true accounts of a random shooter who terrorized a youth event, killing 7 and wounding 7.  This event, which happened before such acts of terrorism became common helps us realize how prayer can help rebuild, heal and restore after such an event and the role that the Christian community can play in bringing Christ’s love into such dark situations.