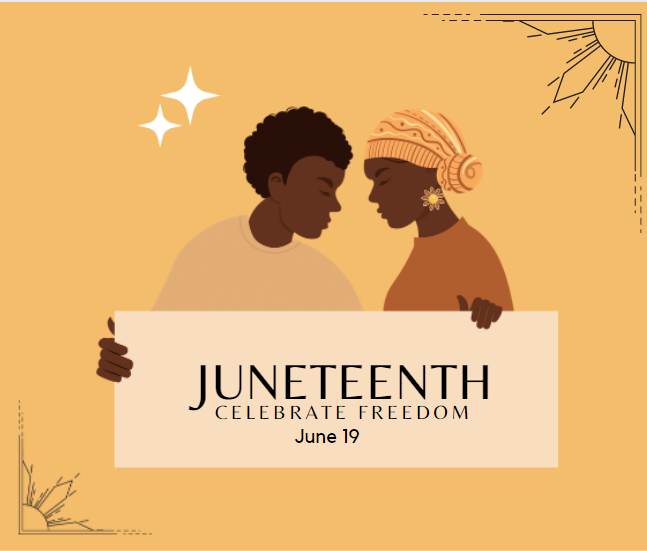 Dear Lord, we pray this Juneteenth Prayer to celebrate the glorious day when African American enslaved people were freed.  We honor the spirit of all enslaved people who toiled, hoped, prayed and sang with unwavering faith for the day of freedom and jubilee.   We hear the strong echoes of their faith as they sang of the determination of Jacob wrestling with the angel, of Daniel surviving in the lion’s den and of Moses leading God’s children to the promised land.  Today they firmly stand with these biblical witnesses of faith as role models of strength and perseverance.

We thank you that you are Our Father who created all people of all ages and races as your beloved children.   As the family of God, when one suffers, we all suffer and when one rejoices, we all rejoice.  And so we rejoice on this day of celebration, affirming our connection as brothers and sisters.

We recognize and celebrate the great contributions made to our culture and nation by African Americans in all fields of endeavor.  We acknowledge all their accomplishments and especially those known to you that history has failed to record.  We pray that you will help us continually discover how our lives have been enhanced and changed by African American scholars, artisans, workers, ministers, public servants, military leaders and musicians.

We affirm the dignity of each person to their rights of freedom and justice.  We celebrate liberators, role models and religious leaders who have fought the good fight.

May their legacy never be forgotten.  And may we be vigilant against the evils of oppression, prejudice and exploitation so we may truly be the land of the free.

The History Behind This Juneteenth Prayer

Slavery was formally outlawed in the US in 1863 when President Abraham Lincoln issued the Emancipation Proclamation freeing approximately 3 million people from slavery.   However, word traveled slowly and the African American community in Galveston, Texas did not receive the news until June 19, 1865.

On that day, the formerly enslaved people celebrated with singing, dancing, praying and feasting.  The following year they again celebrated and it became customary to wear new clothes on Juneteenth to commemorate their new, free lives.  Eventually the Juneteenth celebration spread to other states.  It became a state holiday in Texas in 1980 and a federal holiday in 2021 to celebrate the achievements and culture of African Americans.

Prayer for Justice For Yourself or Justice for Others