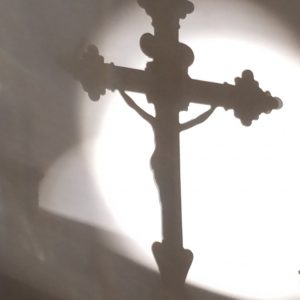 Here are some of the many ways that the Sign of the Cross, which consists of hand gestures accompanied by words that call upon the Father, the Son (Jesus) and the Holy Spirit, can be a powerful and meaningful act of prayer.

As long as I can remember, I have always made the Sign of the Cross before and after every prayer.  It was something as a Catholic I was taught to do at a very early age without the real understanding of why and what this sign symbolized.  Recently I did a book study with a group of friends called  A Biblical Walk Through the Mass by Edward Sri.  After studying this book, I  have found a treasure I never knew I had! No longer will I take this gesture for granted and do it out of habit. Here are some steps to make the Sign of the Cross a powerfully meaningful part of your prayers.

1.  Become familiar with the Biblical and historical origins.

I had no idea that the Sign of the Cross can be traced all the way back to the Old Testament.  In the Book of Ezekiel we read how the righteous ones received a mark on their foreheads in the shape of an x or a cross to set them apart from the corrupt culture and to serve as divine protection. (See Ezekiel 9:4)  We also find in the Book of Revelations many saints in heaven with a similar mark on their foreheads. (See Revelation 7:3)

“Early Christians saw the sign of the cross as demarcating God’s faithful people, helping souls fight temptations, protecting them from all evil and even bringing terror to the devils.” (Quote from Sri, Edward P. A Biblical Walk through the Mass: Understanding What We Say and Do in the Liturgy. West Chester, Penn.: Ascension, 2011.)

Honestly, this ritual I performed before and after every prayer was done out of habit and totally taken for granted.  I had no idea the signing of the cross had biblical roots and was performed by all Christians not just Catholics.  For instance, it is quite common in a variety of denominations to use such a sign on Ash Wednesday services.  Ash Wednesday begins the church season of Lent, which is a 6 week time of repentance and prayer in preparation for Easter.  In these services, the minister uses ashes to trace the sign of the cross on each member’s forehead.

2. Use your hands, heart and mind.

Taking the hand all the way to the center of the stomach forms the whole cross.  In skipping that step shows one rushing through the cross out of habit.  It takes more of a conscious effort to form the entire cross and this is just what our Lord asks of us whenever we are in prayer!  We need to be consciously aware of His presence and also an awareness that we need to SLOW down!

Making the Sign of the Cross should not just be a habit or a gesture like waving hello or goodbye.  When we make the sign of the cross we are saying we want to be separated from the corrupt ways of the world.  At the same time we are calling out to God for our protection against all harm and evil.

“While signing ourselves, we call on God’s name saying, “In the name of the Father and the Son and the Holy Spirit.”   In Scripture to call upon the name of the Lord denotes worship and is often associated with prayer and sacrifice.”   (Quote from Sri, Edward P.  A Biblical Walk through the Mass: Understanding What We Say and Do in the Liturgy. West Chester, Penn.: Ascension, 2011.)

The words of this prayer come directly from Jesus Christ.  After Jesus was crucified, arose from the dead and was about to ascend into heaven He used this phrase as part of His final commandment to His followers.  We read in Matthew 28:19 that as Jesus commissioned His apostles to do His work, He instructed them to, “Go therefore and make disciples of all nations, baptizing them in the name of the Father and the Son and the Holy Spirit.” (Matthew 28:19)

3.  Use this prayer to begin and end your prayer times.

Traditionally, making the sign of the cross before and after prayers would be like starting a letter with “Dear Jesus” and ending it with “Sincerely.”  When we make the Sign of the Cross we are putting ourselves in the right frame of mind, preparing our hearts for the conversation we are about to have and calling upon God to be with us to inspire us as we pray.  In closing prayer we make the Sign of the Cross as a way of saying, “May your blessings and protection remain with us until we meet again!”

4.  Use this prayer in times of fear and temptation.

I also use the Sign of the Cross when I find myself in fear or in times of temptation.  I am home schooling for the first time this year and it has been a real challenge to me.  I know it is only through His grace that I get through the day sometimes.  The kids will see me make the Sign of the Cross during my moments of frustration.  It calms me so the words come out in love and not anger. This is so easy to do but not always easy to remember in the heat of the moment!

5.  Use the Sign of the Cross when praying for others.

I also find myself making the Sign of the Cross over my children, setting them apart and asking for their protection!  Many parents do this at bed time.  I find myself doing it more often when our children are leaving for school or an outing.  I also at times will do a “spiritual” cross over my two children who are away at college. In the absence of my children I will make an imaginary sign on their forehead asking for the Lord to only allow Truth to come into their minds, then a cross on their lips asking our Lord to allow only Truth to come from their lips and finally, a cross on their hearts asking the Lord to protect the Truth that lies within their hearts.

Personal Tips on how to fit this into your daily schedule.

A year ago as we were driving through our neighborhood my son brought to my attention that I did not wait 3 seconds at the stop sign.  Of course I could not deny this so I thanked him and thought to myself, “I have to come up with a way that will make me do this since I find the numerous stop signs in our neighborhood so annoying and not to mention I am always in a hurry!”  So instead of counting to three I have committed to making the Sign of the Cross at each stop sign and offering that prayer up for my children’s purity, three of whom are in serious relationships.  When I first started this I was concerned about what the passengers would think, especially the ones who do not know my prayer addictions!  I have had several people both young and old ask me why I make the Sign of the Cross and I have yet to have anyone tell me it was a ridiculous idea.  It is my hopes that they too will take advantage of any opportunity they find and turn it into a prayer. Here is a list of other times when you might use the Sign of the Cross as a prayer during the day:

1. Before turning on the car, asking for protection on your journey.

2. Then at the arrival of your destination, in thanksgiving for your safety.

3. At the sound of sirens because you know someone is either hurt, in danger or in trouble.

4. Before a test or before going into an important meeting, making the Sign of the Cross is always a great form of comfort knowing you are in His presence and a great witness to others that you are calling upon Him for assistance.

The Biblical origins and traditional roots of this method of prayer:

St John Chrysostom (A.D. 347-407) encouraged the Christians to turn to the power of Christ found in the Sign of the Cross: “Never leave your house without making the sign of the cross. It will be to you a staff, a weapon, an impregnable fortress.  Neither man nor demon will dare to attack you covered with such a powerful armor.”

Laurie Flanigan is a wife and mother of 7 children. Two in college, one in high school , one in middle school and she home schools the youngest two. The family is also blessed to have a son waiting for them in heaven. In addition to all of the basketball, football and soccer games, Laurie is very involved in her church and school community volunteering with the youth and leading and coordinating various Apostolic projects, women's Bible studies and retreats.

← Front Porch Prayer for Family ReconciliationHow to Do a Prayer Drive →