Have you ever felt rejected when you found out that you were second choice?  How do you deal with your feelings of disappointment and embarrassment when you find out that you weren’t the first choice for a job, for a team, or for a ministry position?  Here are Bible verses and wisdom for you to help you make God your first choice as you turn to Him to regain your confidence that He is in control.

1.  Take comfort in the fact that being second choice has been around since Bible times.

Are you one of those people who is always thought of as a second choice?  That has been my story too!  But just because you are someone else’s second choice doesn’t mean you aren’t God’s first choice!

In the Bible in Genesis chapter 29 we find the story of two sisters, Leah and Rachel.  A young man named Jacob asked Laban, the girls’ father, if he could marry Rachel.  Laban said yes, but then substituted Leah for Rachel as the veiled bride because Leah was older and he felt she should be married first.

When Jacob woke up the morning after his wedding to Leah and discovered the deception that he had fallen prey to, no doubt he stormed out of the tent and went looking for his new father-in-law, Laban.  As someone who has been rejected, I can only imagine how Leah must have felt.  I wonder how long it took her to leave the tent and show her face again, cheeks aflame with unmerited shame and embarrassment.  I wonder if she attended the wedding, just a week later, of Jacob and her sister, Rachel, the one beautiful in form and appearance.  Ah, yes!  This was the wedding Jacob had worked for and the one he REALLY wanted.  How painful that experience of rejection must have been for Leah.

I’m not sure that Jacob ever came to love her like he loved Rachel.  Scripture indicates that Leah never felt loved.  She gave Jacob son after son after son, hoping that each one would be THE one that finally earned her the love she wanted from her husband.  It doesn’t seem to have ever happened for her.

2.  Pray and meditate about the times when you found out that you were second choice.

I am 59 years old today.  And for most of those years, I was involved in music at church.  When I was eight years old I began taking piano lessons.  And as soon as I could play, I was “appointed” the pianist for the children’s choir at my little country church in southern Georgia.  I was nine years old.  Music was my life.  It was my place of ministry in every church I attended.  But in 2003 God called me to begin seriously studying Scripture.  At the time I had no idea what God wanted or how He might use me.  But as a result of answering that call, I was asked to begin a Small Groups Ministry at my church.  Months after we began to meet on Sunday nights, I found out that I was second choice for the job.  Someone else had refused to take that position before I was asked.

Today I have the privilege of teaching a Women’s Sunday School Class.  But, again, I was second choice.  The committee responsible for filling each teaching position had intended to ask someone else.  But their first choice had already accepted another place of service and had to refuse this one.  Not only that, when the prospect of teaching this group of women was initially offered to me, it was for a six month period.  I have since come to realize that the six months was a “probationary” period.  If all went well, I would get to stay.  If it didn’t go well, there was a way out.  Even as a second choice, I was considered risky.

3.  Look for God’s purpose in the good results of your service when you find out you weren’t the first choice.

After meditating on the times you have been second choice, ask God to show you the good things that have come about because of your saying yes to the opportunity.

In the teaching position mentioned above, God has been faithful to grow the class both in numbers and, I pray, in spiritual maturity.  Today we are in our eighth year together.

And would you believe it, God allowed me on both of those occasions to know that I wasn’t first choice.  Why would He do that?  It wasn’t to break my heart.  Could it be, that He allowed me to know that I was somebody else’s second choice because years later, when there was evidence of fruit from these ministries, I would understand that I had been His first choice all along?  God had actually orchestrated events so that I could see some of His working “all things together for good to those who love Him and are called according to His purposes.”  I am not special!  If God has done that for me, you can rest assured He’s done it – or perhaps, at this very moment, He IS doing it – for you! 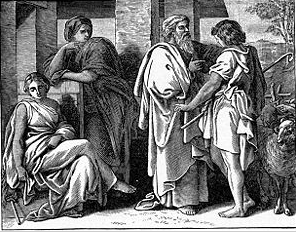 Leah may not have been the wife that Jacob wanted – at all!  But she was the wife that God had chosen for Jacob.  The fourth son that she gave birth to, she named Judah.  And it was through this son that the Messiah came.  Not through Joseph or Benjamin, the two sons of Rachel.

Jacob’s first wife wasn’t even his second choice.  He didn’t want her at all.  Jacob was the patriarch God chose to father the twelve sons that would grow into the nation of Israel.  He blessed Joseph and Benjamin, Jacob’s sons by Rachel.  But the Promised One, the Messiah, would be born of the union of Jacob and Leah.  I believe she was God’s first choice for Jacob.

It really doesn’t matter where you are placed in someone else’s pecking order.  What does matter is that God has places, good works, prepared just for you.  And in those places, you are His number one choice.

4.  Thank God for choosing you for His Kingdom, receive his renewing, healing power and claim His promises for your life.

Father, in those deep recesses of our very being that have been broken and bruised by those around us who have thought of us as “second choice”, we ask You for healing.  Please bind up our wounds and apply Your truth as balm.  And Your truth says . . .

You have blessed us.

You have chosen us.

You have made us the apple of Your eye.

You love us enough that You died on the cross so that our sins could be forgiven.

You have created good works just for each one of us to complete so that Your kingdom will advance right here on Earth.

You are preparing a place for each of us so that one day we can be where You are.

You will take us to be with You.

With You, Father, no one comes in second, or third, or last.  Thank You that You have created good works for each and every one of Your children and in Your kingdom there is room for all of us to have a place of first choice?  In Jesus Name, AMEN!

5. Explore and claim the Scriptures.

Genesis 29:21-31               Then Jacob said to Laban, “Give me my wife that I may go in to her, for my time is completed.”  So Laban gathered together all the people of the place and made a feast.  But in the evening he took his daughter Leah and brought her to Jacob, and he went in to her.  (Laban gave his female servant Zilpah to his daughter Leah to be her servant.)  And in the morning, behold, it was Leah!  And Jacob said to Laban, “What is this you have done to me?  Did I not serve with you for Rachel?  Why then have you deceived me?”  Laban said, “It is not so done in our country, to give the younger before the firstborn.  Complete the week of this one, and we will give you the other also in return for serving me another seven years.”  Jacob did so, and completed her week.  Then Laban gave him his daughter Rachel to be his wife.  (Laban gave his female servant Bilhah to his daughter Rachel to be her servant.)  So Jacob went in to Rachel also, and he loved Rachel more than Leah, and served Laban for another seven years.  When the Lord saw that Leah was hated, He opened her womb, but Rachel was barren.

Ephesians 1:3-4                  Blessed be the God and Father of our Lord Jesus Christ, Who has blessed us in Christ with every spiritual blessing in the heavenly places, even as He chose us in Him before the foundation of the world, that we should be holy and blameless before Him.

Dianne describes herself as: "A redeemed woman who stands amazed at the grace, goodness and mercy of the One True God, the Creator of the universe; a God Who would passionately pursue a relationship with the likes of me. Wife to Angelo, Mom to Katie, living in Alpharetta, GA."