How to do this prayer practice. 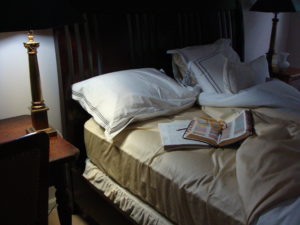 I never have been an “early bird” or a “morning person” and for years this kept me from praying the first thing in the morning.  My typical routine of getting up at 7:00 when I had to get the boys up for school always delayed my prayer time several hours until after the boys were on the bus and I’d finally gotten dressed and had breakfast.  By then it was nearly 9:00 and it always put me in a rush to squeeze in more than five minutes of prayer and meditation.

Recently I read the Autobiography of George Muller who was a minister in the 1800’s in England who proved the effectiveness of prayer by founding orphanages without asking anyone for financial support, instead only telling God of his needs via prayer.  I was especially interested in his words of advice that he gave on how to get up early for prayer.  I have added my own personal experiences and the latest research on sleep to his advice to outline a practical strategy you can start tomorrow morning of arising early for prayer.

1.  Examine your current reasons for not getting up earlier to pray.

George Muller tells why he gave up the habit of getting up early for prayer in this passage from his journal:  “I had been an early riser in the past.  But since my nerves became so weak, I thought it best for me to have more rest.  For this reason I rose between 6 and 7 and sometimes after seven.  I purposely got into the habit of sleeping a quarter of an hour or half an hour after dinner.

I thought I found benefit from the much-needed relaxation.  In this way, however, my soul had suffered considerably.  Unavoidable work often came upon me before I had sufficient time for prayer and reading the Word.”

My personal reason was my excuse that I wasn’t a “morning person.”  Take time to honestly think through why you don’t think you can get up early and then consider the following points and ideas.

2.  Treasure and use your first waking hours as the best part of the day.

George Muller went on a trip to try and recover from his “weak nerves.”  There he stayed with a fellow Christian.  Here’s what Muller wrote upon his return home to his demanding ministry work in Bristol:

“I returned to Bristol and to my old habit of rising early in the morning to commune with God.  I was led to it by the example of the brother in whose house I was staying.  He remarked when speaking on the sacrifices in Leviticus that, just as only the best animals were to be offered up, the best part of our time should b given to communion with the Lord.”

In the Bible we learn that Jesus himself was in the habit of getting up before dawn to pray.  “Very early in the morning, while it was still dark, Jesus got up, left the house and went off to a solitary place, where he prayed.”  (Mark 1:35 NIV)

What makes the first thing in the morning the “best part of our time”?  I personally find the biggest advantage is that there are no obligations and interruptions – no meetings to attend, no calls to answer, no errands to run, no family members needing attention.  Even outdoors you’ll find peace and quiet, which is something lacking later in the day.  I find that my mind is more rested, less distracted and still disengaged from pressing business.  And finally, there’s something strengthening about having a clean slate to start a new day, full of possibilities.

3.  Determine how much sleep you personally need.

George Muller writes, “How much time should be allowed for rest?  No rule of universal application can be given because all persons do not require that same amount of sleep.  Also, the same persons, at different times, according to the strength or weakness of their body, may require more or less.  Most doctors agree that healthy men do not require more than between 6 and 7 hours of sleep, and females need no more than 7 or 8.  Children of God should be careful not to allow themselves too little sleep since few men can do with less than 6 hours of sleep and still be well in body and mind… Since I have allowed myself only about 7 hours, I have been much better in body and in nerves that when I spent 8 or 8 and a half hours in bed.”

Muller says of his own experience on too much sleep: “Concerning my body and the state of my nerves, I have been much better since.  The worst thing I could have done for my weak nerves was to have lain an hour or more in bed than I used to before my illness because it actually weakened my body… Just as too much food inures the body, the same is true regarding sleep.  Medical persons would readily agree that lying longer in bed than is necessary to strengthen the body actually weakens it.”

Modern research agrees with this point and also with Muller’s statement that there is no universal “magic number” of hours of sleep we need.  This is determined by our inborn need for sleep and also by what is known as our “sleep debt” which refers to hours of sleep that continue to be lost because of bad sleep habits, interrupted sleep because of outside interferences and illness.

4.  Start tomorrow morning trusting that God will help you to overcome the obstacles.

Muller says, “It may be asked, ‘But how shall I set about rising early?’  My advice is:  Do not delay.  Begin tomorrow.  But do not depend on your own strength.  You may have begun to rise early in the past but have given it up.  If you depend on your own strength in this matter, it will come to nothing.  In every good work, we must depend on the Lord.  If anyone rises so that he may give the time which he takes from sleep to prayer and meditation, let him be sure that Satan will try to put obstacles in the way.

Trust in the Lord for help.  You will honor Him if you expect help from Him in this matter.  Pray for help, expect help, and you will have it.”

From personal experience, I have found that Muller’s suggestion works.  When I was trying to get up at 6 AM to take a morning jog/run it was extremely hard to keep doing it morning after morning.  However when I started praying during my morning walk, I became more energized and didn’t notice the lack of extra sleep as much.

On my morning prayer walk I pray about a huge variety of topics during my 2 and a half mile walk/run.  (For more information on how I do my prayer walk click this link. )  Combing prayer with exercise out in nature gives you triple the energy.  And my prayer time is seldom interrupted because people normally don’t stop walkers or joggers to ask them to do favors for them.

Muller advises: “In addition to this, go to bed early.  If you stay up late, you cannot rise early.  Let no pressure of engagements keep you from going habitually early to bed.  If you fail in this, you neither can nor should get up early because your body requires rest… Always allow yourself the same hours for sleep.  Make no change except on account of sickness.”

Unfortunately, going to bed at a reasonable hour is not as easy today as it was in Muller’s time before electric lights and cars and electronics.  Experts tell us we should avoid mental activities before bedtime, such as reading, surfing the Internet or answering email and text messages.  The television, the computer and the smart phone are probably the biggest culprits of delaying our bedtimes and they make matters worse by causing us to go to bed with our minds still at full speed which leads to tossing and turning while trying to get to sleep.

6.  Don’t give up right away if you feel tired or drowsy.

Muller advises, “Rise at once when you are awake.  Remain not a minute longer in bed or else you are likely to fall asleep again.  Do not be discouraged by feeling drowsy and tired from the rising early.  This will soon wear off.  After a few days you will feel stronger and fresher than whey you used to lie an hour or two longer than you needed.”

I find that when I pray while exercising, drowsiness isn’t an issue.  After my exercise/prayer time I then sit down to read and meditate and my body is wide awake by then.

7.  Reap the benefits all day long.

Muller says that staying in bed too long isn’t just bad for our health.  He says, “It also injures the soul.  Lying too long in bed not merely keeps us from giving the most precious part of the day to prayer and meditation, but this leads also to many other evils.  Anyone who spends one, two or three hours in prayer and meditation before breakfast will soon discover the beneficial effect early rising has on the outward and inward man.”

I’m not sure how many of us could spend two or three hours in prayer every morning, but surprisingly I have found that one hour of prayer is actually doable.  I am usually out on my prayer walk/run for about an hour and then I spend another ten minutes or so reading the Bible and meditating quietly.  By 7:30 AM I’m ready to shower, dress and have breakfast and get on with the day.

I feel that this first-thing-in-the-morning prayer time sets me mentally and spiritually in a healthy frame of mind with a more positive, faith-filled outlook for whatever the day might bring.

← Preschooler Birthday Blessings Prayer from the ScripturesPrayer for Humility →