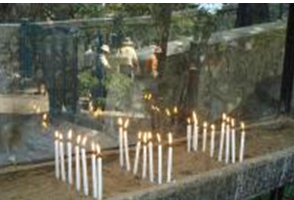 City
Near Selcuk and Ephesus

Description
The House of the Virgin Mary is a small stone house in a beautiful natural setting that is a holy site for both Catholics and Muslims. The designation is based on the tradition that the Apostle John lived in Ephesus after the resurrection of Jesus Christ and brought Mary, the mother of Jesus with him because of the words of Christ spoken from the cross telling John to take care of Mary like his own mother. Although the simple stone house dates from the 6th or 7th century, the foundation is much older and could have been the remnants of a 1st century home. Inside the house is a simple chapel and outside the house is a place to light candles in prayer. There is also a natural spring that flows from a pipe into a basin on the property and many people bring vials and bottles to take some of the water home with them for the purpose of using it as holy water. Down by the spring there is also a large stone wall on which is suspended a wire frame onto which visitors have tied prayer requests with scrapes of cloth and paper. There is also an open air pavilion where Mass is said by several Lazarists Fathers daily and also for special tour groups.

How I used this place of prayer
I found this simple home incredibly refreshing because of its simplicity. I was on a tour which included a private mass for our group. I enjoyed very much the liturgy and the chance to worship together will people of all nationalities and denominations. I spent several moments in front of the candles tourists had lit for prayer, then I went to the spring and filled up two small clay jars with water to take home to a friend.

Personal Tips
This site is quite a distance ( 7 K) from the nearest town and is high on a mountain, so most people come in on large tour buses or in cabs. The walkways are handicap accessible and there are public restrooms and a small gift shop.

Posted in Israel and Middle East and tagged Mary, Turkey