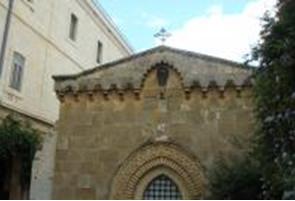 Street Address
On the Via Dolorosa in the Old City in Jerusalem, Israel near the Lion’s Gate 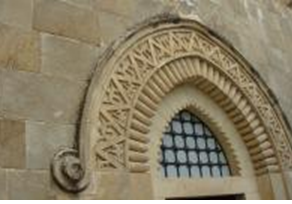 Description
The Flagellation Chapel is in a court yard on the Via Dolorosa which is the traditional pathway on which pilgrims journey on foot to follow in the footsteps of Jesus Christ on the day he was convicted to death and was then forced to carry his cross up the hill of Calvary for his execution as recorded in John 19:1-3. At this site Roman soldiers flogged Christ following his condemnation. Also in the same courtyard is Condemnation Chapel and all are part of the grounds of a Roman Catholic Franciscan Monastery. Inside the small Flagellation Chapel are stained glass windows depicting Christ being flogged. The courtyard features old stone pavement and also a small area of tropical plants where you can glimpse a portable cross which is carried up the Via Dolorosa on special processionals, typically led by the Franciscans at 3 PM on Fridays.

How I used this place of prayer
We visited on a Sunday while a church service was taking place in the chapel and therefore we weren’t able to enter the chapel. However I spent a moment or two in the courtyard meditating on the carved representations of barbs over the doorway of the chapel which reminded me the crown of thorns placed on Christ’s head by the soldiers and of Christ’s physical suffering for our sins.

Personal Tips
Linger here a few moments to get yourself into a meditative frame of mind if you are doing the Via Dolorosa as this is one of the few spots where the Stations of the Cross are off the busy and crowded marketplace roads.

Posted in Israel and Middle East and tagged flagellation chapel, via dolorosa