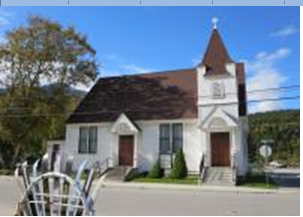 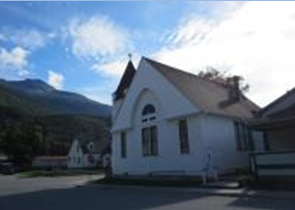 Description
This vintage white clapboard church was built during the Klondike gold rush when thousands flocked to Skagway with the idea of getting rich on a gold claim. The Presbyterian church first occupied this building in 1917 and today it retains much of the original character, including the opera type seats, the lights and the dark wood ceiling. The first Presbyterian minister arrived in 1897 and an earlier church that burned down was called “Union Church” and the building was used by 7 denominations at various times during the week. We had earlier been on a guided tour where we were told that during the gold rush, Skagway had hundreds of brothels and one church.

How I used this place of prayer
I walked to the church from the cruise terminal because I wanted to have a moment of worship and prayer on a Sunday afternoon since we had been on a tour earlier in the morning and unable to attend church services. While on the tour bus I had glimpsed the steeple of the church down 5th street and decided to return there in the afternoon. I was pleased to find the door open to the empty sanctuary on a Sunday afternoon which afforded me a chance for private prayer and worship. 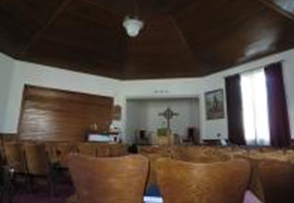 Personal Tips
It’s a fairly long walk from the cruise terminal to the church, however it’s a pleasant walk when you meander among the gift shops in town along the way. If you’re on the main shopping street in Skagway, proceed away from the water toward 5th Ave. Turn left onto 5th and you’ll see the church a block or two down.

Posted in US West and West Coast and tagged Alaska church