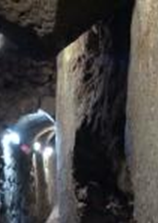 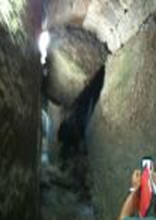 Description
Underground at the end of the drainage tunnel walk is an area of exposed foundation stones of the Temple retaining wall built during the 1st century BC. In this area people place slips of paper with prayer requests written on them much like they do at the Kotel or the world famous Western Wall prayer area of the Temple Mount. The distinction of this underground area is that it can be very private because few people make the trek up the drainage canal to this area. Therefore you or your small group can engage in group or silent prayer together. Also, unlike the Kotel, in this area men and women are not segregated and you may pray together as a group.

Getting here is an adventure in itself. You pay an admission price to walk from the bottom of the Kidron Valley up to the Temple Mount area through a subterranean drainage canal created when Herod enlarged the Temple Mount. This drainage canal carried water runoff and sewage from the ancient city. Part of it is cut into rock with vaulted rock ceilings, the other part was done underneath a walkway above which pilgrims traversed up to the Temple. The tunnel is lighted by electric bulbs, is narrow, goes fairly steeply upward and has a series of steps to navigate. It was opened in its entire length as recently as 2011. The length is a about 1/2 of a mile, though it seems longer as there are not mileposts to let you know how much farther there is to go.
Historical evidence has been uncovered that residents of Jerusalem took refuge in these tunnels during the Roman destruction of the Temple. 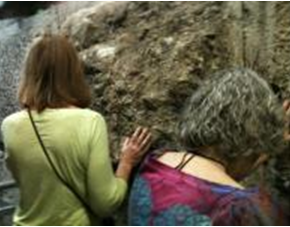 How I used this place of prayer
We hired a local tour guide to lead a group of 5 of us who were on a prayer mission trip together. We didn’t know about this exposed underground part of the Temple mount retaining wall until we arrived and saw the prayer requests in the crevices. We stopped and had a time of about 10 minutes of prayer together for God’s Kingdom.

Hours of Operation & Admission Requirements
Admission fee required. You must purchase a ticket at the Pool of Siloam before entering the tunnel in order to reach the foundation of the Temple retaining wall.

Personal Tips
Good walking shoes are a must. Because not many people are down in the tunnel doing this walk, I would recommend going in groups rather than alone. It’s certainly an adventure that most tourists don’t get to experience. And you are rewarded by ending up in a very special impromptu place of prayer.