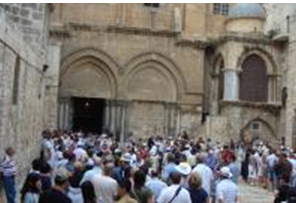 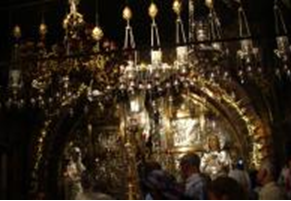 Description
The Church of the Holy Sepulcher is built on the site of the crucifixion, burial and resurrection of Christ. As such, it is considered the holiest Christian site. Historically Christians were known to gather at this site for services up until 66 AD. The site was an old stone quarry originally outside of the city walls where caves were carved for burial tombs. After 66 AD, pagans took over the area and a pagan temple was erected on the spot. in 326 AD the Christian Roman emperor Constantine ordered the building of a church on the site. This original building was destroyed and rebuilt throughout history, making it a mixture of architectural styles including Byzantine, Medieval, Crusader and modern. Today the church is shared by several different branches of the Christian church who have their own chapels and altars at various spots according to their traditions and style. Calvary is not as I had always imagined it. Instead it was a dark shrine area encrusted extensively with gold and silver ornamentation and nearly hidden by hanging lanterns. 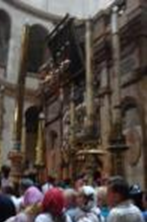 How I used this place of prayer
We visited with a large tour group and we were only able to do a quick walk-through of the main parts of the church. The crowds were noisy, the interior dark and the air inside was stuffy, especially in the area of the crucifixion. It was quite difficult for me to find a place of prayer and meditation under these conditions although I did briefly kneel at the Calvary shrine, though not up close because of the crowds. The one place where I was able to kneel and touch was the Stone of Anointing or the Stone of Unction where tradition says Christ’s body was laid in order to be wrapped in the shroud. People around me were kissing the stone and rubbing their hands over it. I put my hand on the stone and enjoyed a very brief moment of meditation and thankfulness to our Lord for His death for us all. There are a number of different chapels all over the building, and some that I didn’t see may be more conducive to prayer.

Personal Tips
To get to the shrine of the crucifixion inside the church you must walk up steep stone steps.

Also, no buses, cars etc. can get to this location and you must walk over uneven, narrow roadways for quite a distance. If you have problems with walking, try entering the old city through one of the upper gates and walk downhill to the Church of the Holy Sepulcher rather than starting at Lion’s Gate at the bottom of the hill where the first station of the cross is located. Also, watch your step at all times as the paving stones are uneven and can be dangerously slippery when wet. Also, keep an eye on your valuables in the streets.

The tomb of Jesus is in a shrine like structure under the church’s rotunda and only 4 people are allowed inside at once. When we visited there were about 75 people waiting in line and our guide told us it would be about a two hour wait. Instead our guide took us to a side chapel that had a tomb in its wall with a few candles illuminating the interior which will give you an idea of what the original burial cave looked like.

Go with an open mind of respectfulness to the ways that different branches of the church engage in worship and pilgrimages. Instead of seeing crowds and chaos, focus on the many nationalities and languages of brothers and sisters in the faith.

Posted in Israel and Middle East and tagged calvary, tomb of Jesus