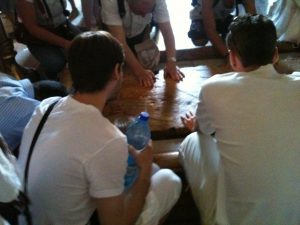 Throughout the Pentecostal and charismatic movements there are countless occurrences of people being “slain in the Spirit” or “resting in the Spirit” in which the person receiving prayer is overcome by God’s presence and they suddenly fall from a standing position to rest on the floor.

Typically, most occurrences happen in a group setting such as a prayer meeting when individuals come up to a minister or prayer leader asking for prayers. Prayer is usually administered by a laying on of hands.

1.  The prayer minister can be anyone filled with the Spirit, ordained or not.

2. When God chooses to operate this way, these are very normal results of a touch of the Holy Spirit.

The Spirit moves as He will.  Remember, these occurrences are normal “walking in the Spirit” happenings– when the Holy Spirit anoints them. We can’t make them happen, and shouldn’t ever try.

3.  The experience will usually draw the person closer to God

It build his or her trust, take away fear, provide healing or revelation knowledge, and sometimes take the person to a new level of spirituality, deliverance or freedom.

4.  Placing ourselves in God’s hands spiritually, without resistance, helps to enable such a touch, but God can lay anyone out, anytime, ready or not.

5.  When feasible, someone will stand behind individuals being prayed over to act as a “catcher” in case they do go down (not all do).

Most frequently, the person who is slain falls backwards, much like a tree falling when cut down, his feet staying in place until his body approaches the floor.

The catcher watches carefully and at the first sign of the person falling, catches him under the arms and lets him come down to the floor in the gentlest way. Obviously, the larger the person coming down, the more challenging the catching and lowering. Sometimes, to the catcher’s surprise, the person will fall back quickly as if being hit in the forehead, even though there is at most only a gentle physical touch, and sometimes not even that. Some go down as quickly as they are touched.

6.  Most people describe their experience as very peaceful.

Their eyes are usually closed, and while on the floor, they can sometimes hear what is being said by those standing around them. Many tell of feeling a deeper sense of God’s love through the experience. During the time down, they either have no ability, or desire, to get right up. To many, it’s a strange but very peaceful feeling of being in two places, on the floor and “somewhere else.” Some don’t know that they went down until they “wake up” on the floor.

They can be down for any amount of time. Some will get right back up as soon as they go down, but most stay down from less than a minute to five minutes. Some are down for ten minutes or more.

7.  Helpers assisting with the prayer group allow the person to lie peacefully and watch carefully for his or her eyes to open and for any signs of readiness to stand up.

This person or persons will help the one who has been “out” to get back to his or her feet. After being slain and getting back up, the person may be somewhat dazed or lightheaded for a few minutes, but not always.

I’ve never seen anyone go down in any fashion that resulted in their getting hurt, even those who went down hard on concrete floors, asphalt parking lots or streets, without a catcher. I’ve never heard anyone who was slain say that they felt embarrassed or wished that it had not happened. I’ve never seen the time or place to be inappropriate either. The Holy Spirit is always a gentleman and gives good things. Those who are fortunate enough to experience or witness such events treat them with total respect for what they are– a touch by the Holy Spirit.

This gift from the Lord has been much maligned by scoffers, primarily because of heavy-handed tactics by aggressive televangelists and their forehead thumping, pushing style. This is not what I am describing. Also, Satan surely must hate this work of the Spirit and tries to discredit it. It is perhaps the most maligned of all manifestations of the Holy Spirit.

9.  Sometimes it isn’t necessary for anyone to be touching a person in prayer.

I have seen people who were standing in a church service just standing there, then they crumpled and went straight down.

I have also seen this happen based on the place a person is standing.  One time as a group began lining up for prayer and working their way up the center aisle, at a certain point in the aisle, about halfway, men and women began dropping to the floor with no one touching them. They went down at the exact same spot. We referred to it as a “grace line” where God’s grace touched each.

10. Other symbols may bring about this reaction, such as holy water.

At one service, a priest gave a prepared talk and there was a brief time of singing.  As the priest began walking through the gathering, he began sprinkling the people with holy water (blessed water), which he would cast out over the crowd. As the holy water touched them, they would go down, fast.

11. The person praying does not even need to be very familiar with this manifestation for it to happen.

I was at a seminar given by a priest who was a teacher and theologian.  The priest closed the session by asking if there were any young people in the congregation that had ever had any interest in considering a vocation to the Church. He invited them to come up to the altar to be prayed over and about forty people came forward.  The priest looked surprised by the numbers, but started to pray for this group.

Right away, various young people began falling backwards, slain. The priest looked quite shocked; this was definitely not what he had expected. The group was momentarily caught off guard, but quickly, some realized that the Holy Spirit was “breaking out” and that many more would likely be slain. Probably 200 or more were in attendance. It was a rare person who wasn’t slain that night. It may well have been the first time the priest had witnessed or been part of such a spectacular Holy Spirit happening.

My personal experiences and tips:

For a couple of years after being baptized in the Spirit, my wife Nancy had resistedbelieving this phenomenon was “real” and not somewhat self-induced. One day we scheduled ministry for her with an Episcopal pastor’s wife, Jennie. As Jennie laid hands on and prayed over her, Nancy went right down and I caught and laid her on the floor.

She was down for ten minutes or more, with her arms extended straight up in the air over her head, toward the Lord, the whole time. When she got up, we told her about her arms in the air– she had had no idea, and she felt no tiredness in her arms or shoulders. She never doubted again.

I have also seen this happen when I have personally prayed over others.   For example one Sunday morning I was assisting Nancy at the soup kitchen, The Masters Table, and it was time for the guests to start arriving. Among the mixture of people in the group was a big, strong looking man who I didn’t remember seeing before. He told me his name was George and that, the day before, after a long confinement, he had been released from prison. Since I didn’t walk away but showed interest in him and talked with him about his future, he told me a few details and seemed to want to trust me.

After eating his lunch and preparing to leave, with no place to go, he asked if I would pray over him as he started the next chapter of his life. Since the soup kitchen was jammed with people, I suggested that we go outside, away from the crowd. He was fine with that. We found a spot just behind a parked car– about as private as possible, considering that we were out on the street.

Shortly after I laid hands on him and began to pray, George just started going down, like all strength had left his legs. He just crumpled under the touch of God and slid down the back of the parked car into a pile on the street. With some help, George got to his feet, a little dazed but thankful for the Lord’s touch and care for him.

The Biblical origins and traditional roots of this method of prayer:

2 Chronicles 5:14 “So that the priests could not stand to minister by reason of the cloud: for the glory of the Lord had filled the house of God.”  KJV

Acts 9:3-4: “As he neared Damascus on his journey, suddenly a light from heaven flashed around him.  He fell to the ground and heard a voice say to him, ‘Saul, Saul, why do you persecute me?’”  NIV

The wind blows where it wishes and you hear the sound of it, but do not know where it comes from and where it is going; so is everyone who is born of the Spirit.”   John 3:8

Posted in How To Pray, Prayer Groups, Ways to Pray and tagged charismatic prayer, resting in the spirit

Gary Garner is a professional fine woodworker, designer and sculptor who operates “Images of the Cross” which produces unique crosses and sanctuary furnishings “to the Glory of God.” www.imagesofthecross.com Gary is the author of the book "Swept up by the Spirit" and a newspaper writer and a member of the Catholic Writers Guild which publishes article on the activity of the Holy Spirit in current times. He and his wife, Nancy, are members of the Alleluia Community in Augusta GA. They have 4 children and 14 grandchildren.